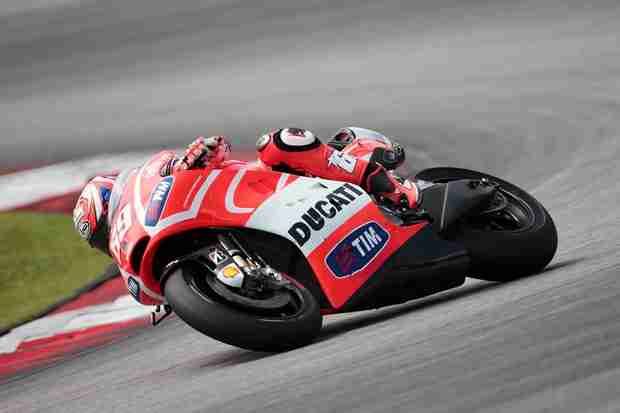 Today marked the conclusion of the three-day IRTA-organized test at the Malaysian Sepang circuit, where teams prepared for the new MotoGP Championship, to start on 7 April in Qatar.  Andrea Dovizioso and Nicky Hayden took to the track on their Desmosedici GP13 bikes. The Italian, who is making his debut with the Desmosedici this year, had to adapt to a bike and team that are completely new for him and, thanks in part to his recent experience aboard other factory bikes, was able to give his first real feedback to the Ducati engineers regarding the frame, electronics and engine characteristics.

The American, beginning his fifth season aboard the Italian bike, tried to find his rhythm as he used the three days of testing to provide his own valuable input for the future development of the bike. The team certainly can’t be satisfied with its results, so it heads home aware of the challenging work that must be carried out in order to get back toward the top of the time sheets. They will begin trying new ideas during the next test at Sepang at month’s end and at the Jerez test in late March.

“We obviously can’t be happy when our times are that far off of the top guys, but we knew it was going to be tough. Sepang has never been a particularly good track for Ducati: we raced here in October, and the bike hasn’t changed much since then. We found a couple little things over the course of the test, which allowed us to improve our consistency on day three, but I think we need something big. Anyway, it was nice to be back on the bike and working with the guys. The team has worked extremely hard, and we just have to stay motivated and keep giving them the right information so that we can hopefully start making some real progress soon.”

“Yes, it was a difficult test but we didn’t expect it to be any different. We’re here to improve the situation and everybody knows the level we are now so we have to improve. We tested as much stuff as we could, because we’re focused on improving the bike. The gap to the others is big, and we pushed a lot to understand the bike. I gave a lot of feedback, maybe too much! We don’t know how the next test in Sepang will be. There’s too short a time between now and then, so it’s difficult to do something big in this time. We still have to decide which parts we can bring to the second test. Unfortunately, we need time to try something big.”

“Obviously, we’re not satisfied. We knew we were starting from a base that needed significant development work, but it’s not nice to realize we’re still so far from the leaders. Still, our engineers gathered important data, and now the only thing to do is to roll up our sleeves and continue the development program in the factory. The goal is clear: bring Ducati back to the top of the results sheet as soon as possible.”