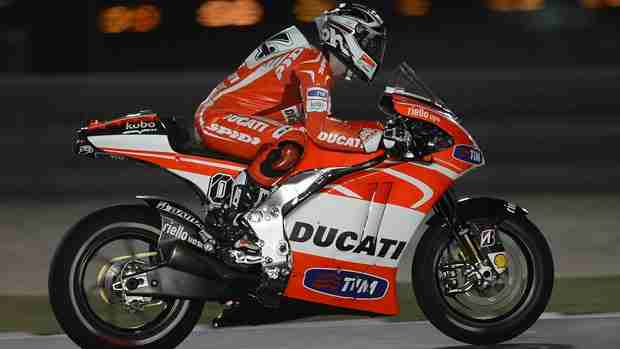 In the debut of MotoGP’s exciting new qualifying system and his first qualifying session as a Ducati Team rider, Andrea Dovizioso had a successful Q2, with just .009 seconds separating him from the front row for tomorrow night’s season-opening Qatar Grand Prix, and just .446 seconds between him and pole-qualifier Jorge Lorenzo. Thanks to solid performances over the previous two days, both the Italian and his teammate Nicky Hayden had advanced directly into tonight’s 15-minute Q2 session, which was made particularly challenging by an extremely dirty track surface. Dovizioso was pleased with his setup and was able to ride to his bike’s limit, whereas Hayden struggled with chatter in his first run and pitted for a fresh tyre after just one lap. His second exit was affected by unfortunate timing and mistakes.

“I’m very pleased to make the second row, just a few tenths from first place. I didn’t expect to do a 1:55.1 lap, or especially to be so close to Lorenzo. It was nice to have a good feeling with the bike when I tried to push hard with a new tyre in the last laps. I’m really happy with the work that the team did this weekend because we managed to make it to qualifying with a perfect setup of our electronics, so we were quickly able to use the bike to its full potential. Starting from the second row will be important for the race. I still have some big question marks for the race because everything is still new for me, but I’m very motivated for tomorrow. We’ll see how things are in the race.”

“In the first run, I had a lot of chatter from out of nowhere. I went back out, and right when I went to start my hot lap, the other guys were pulling out of the pits, and I just made too many mistakes in the traffic. I’m certainly not thrilled, especially because last year I was one second faster in qualifying. It was a poor job by me when it counted, but credit to Andrea for a really good session. I think our setups are very similar, but we’ll definitely have to check his data.”