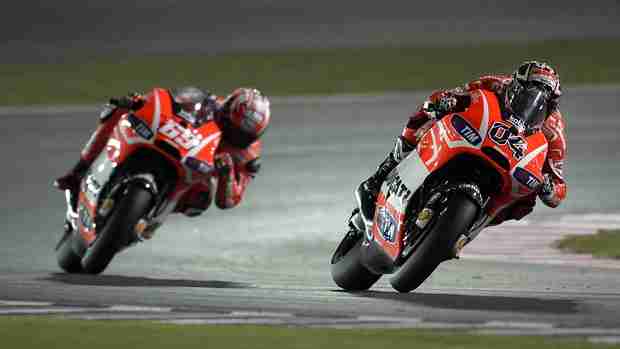 With the 2013 MotoGP world championship having recently kicked off in the Middle East, the Ducati Team is now headed for round two, which will mark the first motorcycle Grand Prix to be held in Texas. Situated near the state capital of Austin, the new Circuit of the Americas raises many question marks for the MotoGP riders, although Ducati Team racer Nicky Hayden had the opportunity to experience the Hermann Tilke-designed circuit last month on a road bike, when he and Ignite Pramac Racing rider Ben Spies, a fellow American, took part in the press launch of the 1199 Panigale R. For Hayden’s teammate Andrea Dovizioso, on the other hand, this will mark his first visit to the facility.

Adding to the trial will be the fact that COTA is quite challenging to learn, being 5.513 kilometres long (3.426 miles), with a full 20 corners, including the track’s signature uphill Turn 1 lefthander. Much of the circuit is 15 metres wide (50 feet), making for multiple line options in many of the corners. Austin will mark the first of three rounds this season to be held in the United States, Ducati’s number-one market.

“I haven’t been to the Circuit of the Americas, but from the video it looks like a really big and nice track, and it also looks really difficult. Unfortunately, we didn’t test there like some of the other guys, so it will be a problem for us in the beginning. Anyway, I’m really excited for us to be riding on a new track.”

“Right after Qatar I had to fly to Asia for some promotional events, so I hope to be at my best for Austin! Having three GPs in my home country almost seems like a dream to me, and the Circuit of the Americas is really a great track that’s nice, safe and new, with great facilities. I’ve been around it on a street bike, so I know the layout, although it will obviously be much different on a MotoGP bike. The track has a little bit of everything, and it’s definitely not easy. It’s really long, quite wide, and very technical, with some very particular corners that have open entries–often blind–and tight exits. I like a good challenge, and this track definitely offers one. Hopefully the American fans will come out and support the race and set up a nice trend for the next two American rounds.”

“The track will be completely new for us. Nicky did a sort of shakedown with a Panigale R street bike, and from the way he describes it, it will be quite difficult. There are fast straightaways with hard braking zones and very tight hairpins, but there are also sections with fast corners. Unfortunately, since the Ducati Team didn’t test at COTA, we’re at a bit of a disadvantage to our competitors; we’ll have dual assignments during the early sessions–we have to find a general setup and the correct settings for the electronics–so we hope to have good weather in all of the sessions. The weekend is a bit of an unknown for us, but we’re optimistic.”