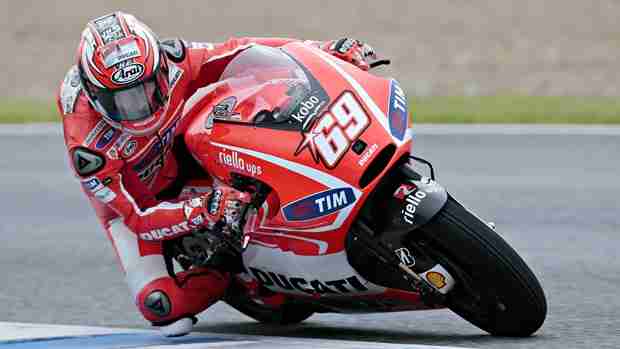 Following a long winter of testing and preparing for the 2013 MotoGP championship, the Ducati Team finally heads to the Middle East this week for the first Grand Prix of the year, at Qatar’s Losail International Circuit. The squad has a much different look than it did just over four months ago at the 2012 season finale in Valencia, Spain, with changes in management and a new rider in Andrea Dovizioso. The Italian will be campaigning his first race aboard the Desmosedici, whereas team-mate Nicky Hayden enters his fifth season with the Italian factory. The team approaches the Qatar Grand Prix with the awareness that 2013 will likely be something of a building year, and the Losail Circuit, where the current lap record was set in 2008 by then-Ducati rider Casey Stoner, offers a first opportunity to see how competitive Dovizioso’s and Hayden’s bikes can be.

As has been the case since that same year, the season opener will take place at night, with illumination provided by an impressive array of outdoor lighting. Also unique is the format, with the event taking place over four days rather than the typical three, and all three classes given an extra free-practice session–the first of which will take place on Thursday night. In addition, Saturday evening will see the dÃ©but of a new qualifying system for the MotoGP class, as riders will endeavour to advance through a series of elimination sessions.

“Losail is a good track for me, as I’ve always had good races there, and I think that the Ducati’s strengths can work in Qatar. We head to this race determined to do well. We know that our pace isn’t so far from the others’ on new tyres, so we should certainly be able to fight for a good grid position, but we have a significant gap to make up in race configuration. Unfortunately we weren’t able to do a race simulation in the tests, so tyre wear is a question mark for me.”

“I’m very much looking forward to starting another season. Of course I wish we were going into it with more speed and consistency, but I feel like we’ve made progress at every pre-season test. The team has used the dry track time we’ve had very well, and we were able to get more out of the recent Jerez test than I thought we would, considering I’d just had wrist surgery. The Qatar track is smooth, which should suit our bike well, and racing under the lights at the first round is always very unique.”

“Unfortunately, we weren’t able to complete our work program at Jerez, due to the bad weather. Now we head to Qatar, where we’ll have to try some things in order to complete the setup work. It will be a strange race in unique conditions, as is always the case in Qatar. We hope that the wind won’t bother us too much and that our team will do well. We’ve had very good results there in the past, so the track isn’t an enemy for us. We’ve made steps over the winter, and our bike has improved at every test, so we expect to make further advances in Qatar. Andrea has done well at this circuit; he had a nice race there in his MotoGP debut and finished fourth, and we’ll be happy if we’re able to repeat that. Nicky also likes the track and has done pretty well there, but we’ll have to try hard to limit tyre wear. We still have some question marks, but anyway, we’re optimistic.”