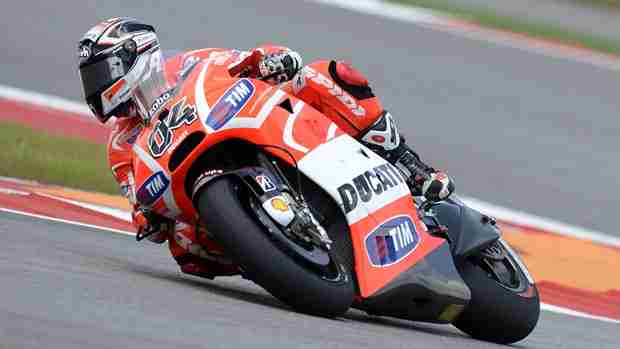 Having begun the year with a pair of “flyaway” races, in the Middle East and the United States, the Ducati Team now travels to the first European round of the year, in Jerez de la Frontera, Spain. Situated near the southern tip of the Iberian Peninsula, just over an hour from the Strait of Gibraltar, the Circuito de Jerez is known for drawing large and enthusiastic crowds. It has historically proven to be a challenging circuit for the Ducati Team, but the squad has also enjoyed successes there, one recent example being a podium finish by Nicky Hayden in the rainy Spanish GP two years ago. During both the race weekend and an official post-race test on Monday, the American and his Italian teammate Andrea Dovizioso along with Ducati Test Team rider Michele Pirro in his first of three wildcard rides scheduled for the season–plan to build upon the work carried out in Qatar and Texas, and to maximize the competitiveness of the Desmosedici GP13 as the series begins a stretch of six consecutive European races.

“The Jerez circuit isn’t among my favourites, but anyway, I think that the best approach at this point in the season is to take it race by race, and that’s the attitude we have as we head to Spain. The Desmosedici GP13 is completely different from the bikes I’ve ridden in the past, which is fine for me, but we can only make the difference when we’re able to improve some characteristics of the bike. Last year I managed to finish the race there in fifth place, but the most important thing is to be able to make progress with the bike’s development.”

“This race is almost like the start of the ‘normal’ season–day races in Europe–but of course that doesn’t mean I expect things to get any easier. We did get to test at Jerez, and although the weather didn’t allow us to get many laps in, that experience will still be helpful. Hopefully we’ll start out better on Friday and put up a better fight through the weekend than I did in Texas. I’ve got plenty of support from the guys, so that’s definitely not an issue. I look forward to going to Spain and doing our best.”

“Jerez is the first European race of the year, and it’s also one of our test tracks, but although we’ve already had a number of tests there this year, bad weather has unfortunately prevented us from taking full advantage. It’ll be an important opportunity for us to learn more because the track is very different from the other two that we’ve raced on so far. In addition to Nicky Hayden, who started last year’s race on the first row, and Andrea Dovizioso, we’ll have the test team, with our test rider Michele Pirro, who’ll be doing his first wild card race. His GP13 will have some new development parts that will help us to focus on the development for the rest of the championship.”