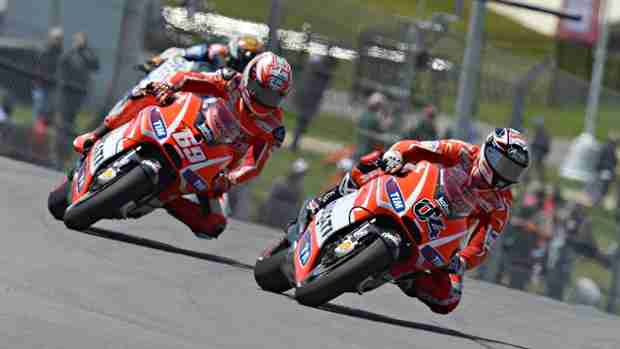 Andrea Dovizioso and Nicky Hayden had a full work schedule during MotoGP’s first two free-practice sessions to be held at the Circuit of the Americas. Along with their crews, the Ducati Team riders, who didn’t take part in a private test at the circuit last month and were therefore making their Texas debut on MotoGP bikes, gathered as much data as possible in the windy but sunny conditions. Temperatures were lower than expected for the morning practice, affecting traction. In addition, the Italian had to deal with a minor electronics issue in the afternoon session, but he switched to his second bike and set his best time of the day, which was good enough for seventh place. Hayden was ninth.

“Today went pretty well, both in the morning and the afternoon. I’m happy because although the conditions and the track were both difficult, we’re not so far from the top guys, and I feel good on the bike. The conditions changed a lot in the second session and will probably change again tomorrow, so we’ll continue working and see what times we can do. Grip is really important on this circuit, because it’s quite strange–different from the tracks where we usually race. I thought it would be fast, but it’s not; there’s a long straightaway, but almost all of the corners are taken in second or third gear. Still, they’ve really done a great job here.”

“It was great to get out and try the track on a MotoGP bike, as it’s really a first-class circuit and facility. This morning the biggest challenge was the lack of grip; on a new track with not much temperature, the tyres were simply too hard, though the conditions were better in the afternoon. We had a few problems with the rear, and when we made that better, that put too much load on the front. We knew it was going to be tough, since the other manufacturers tested here and have a lot of data. We’ve got some catching up to do, but I certainly hope to get closer tomorrow.”