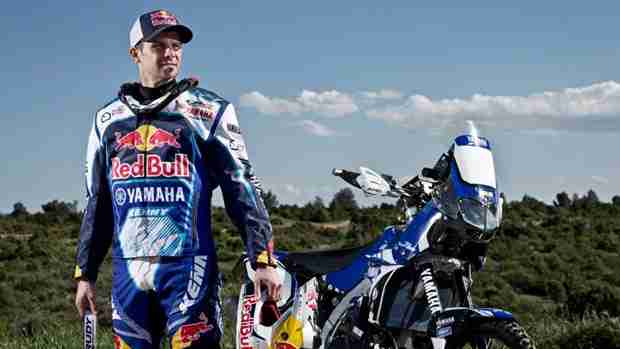 Yamaha Motor France has today announced the signing of 2013 Dakar Rally Champion Cyril Despres. Despres will spearhead Yamaha’s quest for victory in the 2014 Dakar Rally on the Yamaha YZ450F based machine with Frenchman Michael Metge as support rider. Despres is the most successful Dakar rider of the last decade, winning in 2005, 2007, 2010, 2012 and 2013. His record in the world’s toughest endurance race is only beaten by fellow Frenchman StÃ©phane Peterhansel’s impressive six victories, all taken with Yamaha.

The Dakar specification YZ450F with its revolutionary rear slanted engine has already impressed in this year’s Dakar Rally. Yamaha’s class-leading off-road machine took French rider David Casteu and Dutch challenger Frans Verhoeven to a stage victory each as well as holding the overall lead for four days during the first week in the hands of French rider Olivier Pain.

The Dakar took root in Yamaha Motor France’s DNA at the start of the race’s history in 1979 thanks to the determination of one man, Jean-Claude Olivier. Known to all as ‘JCO’, Olivier was a Yamaha icon and loyal employee for 45 years until his retirement in 2010. He remained very active as an ambassador with Yamaha until passing away tragically in a road accident earlier this year. JCO competed in the Dakar Rally for Yamaha between 1979 and 1989, finishing second in 1985. A former President of Yamaha Motor France, he was responsible for guiding StÃ©phane Peterhansel to no less than six Dakar victories. He understood that this unique event allowed not only for machines to be tested to their limits, but also for the best of human nature to shine through.

The Dakar has also been an extraordinary rolling laboratory for Yamaha’s motorcycle technology. First with the single-cylinder bikes, followed by the twins up until 1998, when the development programme of the 450cc single was launched. David FrÃ©tignÃ© took on development of the WRF450F, including riding a 2-wheel drive version in 2004. In total, thanks to David FrÃ©tignÃ© and Helder Rodrigues, the WR-F achieved three Dakar podiums.

“I am very motivated by the idea of joining Yamaha’s ‘men in blue’. I remember watching them on TV as a boy and dreaming… Within the brand I have discovered a strong feeling of family, with an excellent flow of communication and a technical staff that is motivated and open to feedback. I am certain we will form a strong, united team, focused on one objective: achieving victory. I am also delighted to have Michael Metge as support rider. He is an ambitious newcomer who entered his first Dakar successfully this year and is extremely motivated.”

“We had the chance of meeting Cyril Despres after the 2013 Dakar. Straightaway we understood that not only has he the experience, technical know-how and riding ability to make the Yamaha shine, but also that we share the same values and ambitions. He gave us the desire to work with him because his straightforward manner and professional approach won us over. He is a new source of motivation for all our technicians and for the brand. Both his track record and his personality make him an appreciated public figure who brings an international impact that will benefit Yamaha’s entire global market.”