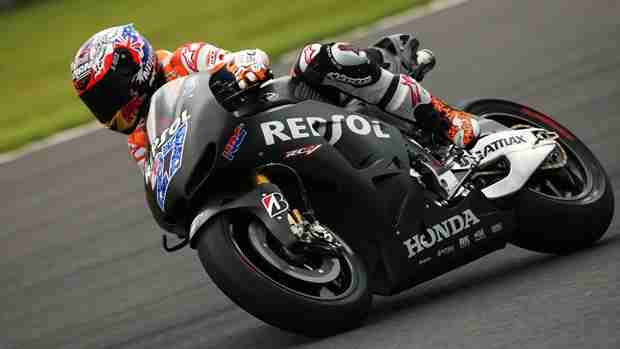 After a frustrating first day yesterday, where Casey Stoner only managed six full laps due to bad weather, the second day of testing has been very productive. He completed 47 laps and was able to fulfil the test programme scheduled by HRC and execute all of the tasks that had been planned.

This morning, Casey tested a few small items on the 2013 RC213V and continued into the afternoon before switching onto the 2014 machine, the same as Dani Pedrosa and Marc Marquez tested in Aragon.

“Thankfully today the weather improved a lot, in fact it was pretty hot, and we were able to get some good track time and work on our test programme. We had a productive day in general and thankfully the test plan wasn’t too hectic, so we were able to get most of it done today, after yesterday’s washout. It was great to see the team, even if there were only a few people here, and I thank Honda for all their support as ever. It felt really good to get back on the bike after 9 months and I’m happy with how the test went, but it doesn’t change my mind about the wild cards -this is not something I am planning to do.”

“Over the course of Casey’s two-day test, we’ve been able to gather a vast amount of data and ideas for development. Consequently, we aim to increase our pace of development and hope that this, in turn, will lead to us winning this year’s Championship. We focused exclusively on the RC213V, but in future tests, we’ll get Casey to test-ride the tentatively named MotoGP Production Racer and assist in raising its level of performance even further.”