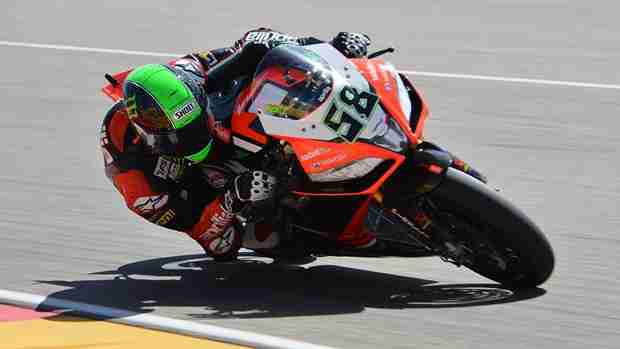 The Aprilia Racing riders confirmed the good impressions from the Friday sessions and astride their official RSV4 Factory bikes they were key players in the Superpole session that decided the starting grid for the races tomorrow. Laverty and Guintoli — who are tied in the World SBK rankings lead after a win and a second place each during the opening round in Australia — came through the first of the three Superpole sessions easily, both saving their qualifier tyres. Starting the second session on qualifiers from the first lap, the two riders quickly put themselves in a safe position (Laverty second and Guintoli sixth, later dropping to eighth place just before the end of the session) to go through to the decisive round where only the top nine participate.

In the decisive session Eugene Laverty showed that he was quite ready to take advantage of the high performance tyre and immediately stopped the clock with the second best time (1’56.638), less than 3 tenths behind pole specialist Tom Sykes. An excellent performance by Sylvain Guintoli as well who, after hovering in ninth and seventh place during the sessions yesterday and this morning, took an excellent fourth place (in 1’57.486) which will put him in the best spot on the second row of the grid tomorrow.

“Our goal is always to qualify on the front row and we managed to do that here at Aragon as well. Today we worked quite well, especially in the last free practice session where we found some good solutions for our race pace. Superpole went according to schedule. Second place is an excellent position to start from. Tomorrow will be difficult because there are at least four other riders other then myself who are quite capable of making a play for the win. There have always been some great battles on this track, we’ll definitely be in the game and we’ll have our sights set on the top step of the podium”.

“Superpole went better than I had hoped, I don’t like to make excuses, but I think that I am still lacking something compared to the other riders in terms of race pace. In any case I took the first spot on the second row which is a good placing since it puts me on the outside of the first brake. I have never achieved good results on this track so tomorrow I will be looking for two good races. The feeling with my RSV4 increases lap by lap and that makes me hopeful, I want to take full advantage of all their strong points like I did at Phillip Island”.