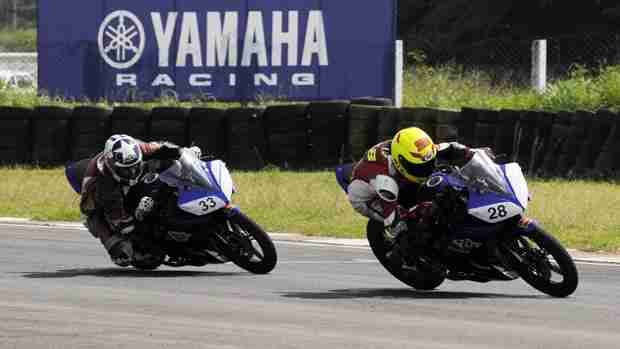 The 4th round of the 2013 YZF-R15 One Make Race Championship concluded today at the Madras Motor Race Track, Chennai after a brilliant start. There was a huge crowd of racing aficionados at the race track to cheer the racers. The Championship which has one more round to go will conclude in December 2013 before it comes to an end. The racing event is being organized in association with the Madras Motor Sports Club (MMSC) and the Federation of Motor Sports Clubs of India (FMSCI) and is a part of the Indian National Racing Championship 2013.

The total participants in Open class were 21 in strength out of which top 16 qualified for the races. Again, there were two races held for the qualifiers of the Open category. The results for the same were as follows:

The contestants got on the track on Yamaha’s Super Sports YZF-R15 and experienced the breathtaking acceleration of the bike on a race circuit. Loaded with true Yamaha racing DNA, YZF-R15 provided complete racing experience to the biking enthusiasts and hands on feel of its power, stability, cornering and braking. Yamaha made their experience more exciting by mounting Daytona Racing Kits in the bikes. These kits are developed using valuable experience gained from MotoGP & World Superbike racing and are designed exclusively for racing purpose in a closed circuit. The winners of the R15 One make Race championship 2013 will be getting a chance to participate in the Yamaha ASEAN Cup 2013 to be held later this year.