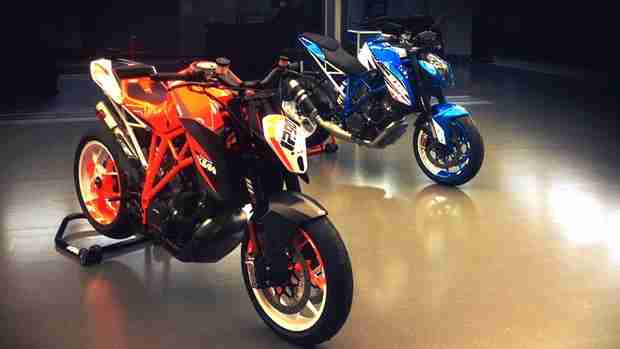 The fully finished production version of the KTM 1290 Super Duke R in a special ‘Patriot Edition’ was presented to the American Dealers of KTM earlier this month on the eve of 4th of July. What we can see from these beautiful photographs taken by the guys at DERESTRICTRED.com is the final production version of the 2013 KTM 1290 Super Duke R that will be available across the globe later this year. A lot of this specifics from the earlier spy shot has been retained and are we glad to see a new headlight. Now, there is still no word on the specifications but the numbers are expected to be stratospheric along with some high tech electronics. The 1290 V twin is expected to produce close to 200HP of power with its weight being around the same number. Earlier during the KTM Duke 390 launch in India we were able to gather information that we might actually be able to see the KTM 1290 Super Duke R in India as well after its global launch in the coming months. It is expected to be brought in as a CBU. Check out some of the expected specifications below.