The winter break is drawing to an end, the countdown is on to the 2013 FIM Superbike World Championship, and the BMW Motorrad GoldBet SBK Team is under starter’s orders. With just three weeks to go until the season-opener in Phillip Island, Australia, the realigned BMW Motorrad works team was presented to the public in Munich (GER) on Monday. The international media launch took place in the Double Cone building at BMW Welt near the BMW Group’s headquarters.

BMW Motorrad Italia is now responsible for the works team’s race and test outings, as well as work on the chassis. The power train and electronics are developed by BMW Motorrad in Munich. Marco Melandri (ITA) lines up in his second season as a BMW Motorrad works rider alongside his new team-mate Chaz Davies (GBR). As General Manager BMW Motorrad WSBK, Andrea Buzzoni is the man with overall responsibility for the Superbike project. Stephan Fischer, Technical Director BMW Motorrad Motorsport, is in charge of motorsport development at BMW Motorrad. Serafino Foti is Sport Director of the BMW Motorrad GoldBet SBK Team, while Andrea Dosoli is responsible for technical issues within the Superbike team as Technical Director. As title sponsor, GoldBet is an important partner of the team.

“Motorsport will once again play a major role for BMW Motorrad this year,” said Stephan Schaller, President of BMW Motorrad, at the official launch. “2012 was by far our most successful season to date in the FIM Superbike World Championship. With six wins, 18 podiums, six fastest laps, the second place overall in the Manufacturers’ Championship and the title win in the FIM Superstock 1000 Cup, BMW Motorrad established itself as one of the top teams in the series. With this strong position as a basis, we have realigned our works commitment for the coming season. I am more than confident that we can achieve our goals with the new structure, experienced team management, and works riders Marco Melandri and Chaz Davies. These goals are to firmly establish ourselves among the top teams at the pinnacle of production-based motorsport in the long term, and to claim as many wins and podiums as possible.”

“We are looking to follow on from the success BMW Motorrad achieved last season,” explained Andrea Buzzoni, General Manager BMW Motorrad WSBK. “The various parts in the restructured team became attuned to one another very quickly. Two very experienced teams, which have already shown in the past just how strong and professional they are, have merged into one team. In order to be successful, however, you also need good riders and an outstanding bike – and we have them in the form of Marco, Chaz and the BMW S 1000 RR. Another important ‘ingredient’ is the speed. The speed, which is one of the most important factors on track, is also essential for the work of the team: to react and act fast is crucial to reach the target and to be competitive.”

Works rider Marco Melandri played a major role in the success of BMW Motorrad last year. “Going into the season we certainly didn’t expect to pick up six wins and be in contention for the title right down to the final race. This year I am primarily looking to improve my own performances. I don’t want to make the same mistakes as I did in 2012, and want to make the podium more consistently,” said the Italian, outlining his goals for the 2013 FIM Superbike World Championship. 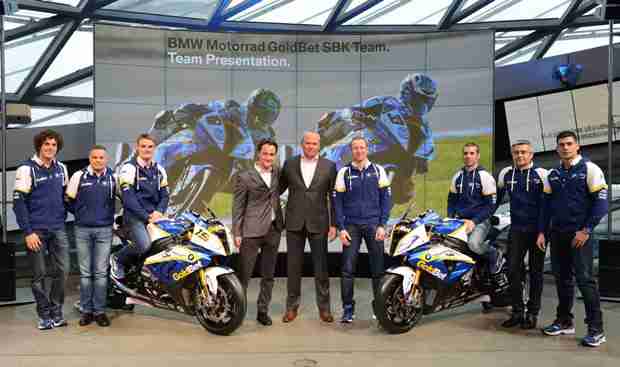 Britain’s Chaz Davies is in his first season as a BMW Motorrad works rider. “This is a big step for me, as it is the first time I have been directly involved in a works project. That means an awful lot to me,” said the 2011 Supersport World Champion. “I am very proud, as it is not just any works team,but BMW – a powerful brand. I want to take full advantage of this opportunity. My goal is to continue improving, become more consistent, and end the season in the top five.”

The BMW S 1000 RR was further developed over the winter and improved in all areas. “To be victorious, you need a bike that combines many different factors in one perfect overall package,” said Stephan Fischer, Technical Director BMW Motorrad Motorsport. “Engine, electronics, chassis, set-up – all these factors must interact optimally – optimally meaning that the overall package is perfectly tailored to the needs of the rider. Our job is to provide our riders with an individually optimised bike, which allows them to perform to the best of their ability on every track and in any conditions.” Regulations stipulate that 17-inch wheels are to be used in the FIM Superbike World Championship as of this season. The conversion to the new wheel size played a major role in the development work for 2013. It required modifications to every area of the bike, to the chassis, the electronics, the engine and the entire set-up.

In developing the bike, the team in Italy and the R&D department at BMW Motorrad in Munich work hand in hand. “Our close cooperation is the key to have a competitive package”, explained Andrea Dosoli, Technical Director of the BMW Motorrad GoldBet SBK Team. “We are one team and we have a continuous information flow. The bike is a complex package, any change to the engine or the electronics has an impact on the chassis and vice versa. My role is to steer the information flow. We plan the development process according to the riders’ feedback and requests as well as to the current competitive situation.”

“I am confident that the restructured team has the skill and know-how required in order to establish BMW Motorrad as one of the top teams and to achieve the goals we have set ourselves,” said Serafino Foti, Sport Director of the BMW Motorrad GoldBet SBK Team, at the launch. “I am also delighted to have two top riders like Marco and Chaz in the team. Marco has shown what a huge talent he is, and he is one of the best riders in the world. Chaz has also shown just how quick he is by winning the 2011 Supersport World Championship. He also claimed his first win in the Superbike World Championship during his debut season in 2012.”

BMW Motorrad is also continuing its successful involvement in the FIM Superstock 1000 Cup, in which the team won the title in both 2010 and 2012. Reigning champion Sylvain Barrier (FRA) lines up in his third season with the team. His new team-mate is Greg Gildenhuys (RSA), who recently won the South African Superbike Championship three times in a row.

BMW Motorrad’s clear objective in the FIM Superstock 1000 Cup is to defend its title. “We know that it will be a big task to defend the title in such a fiercely-competitive championship. However, I am confident that we can achieve this goal with the overall package we have at BMW Motorrad,” said Sylvain Barrier. His new team-mate Greg Gildenhuys added: “I am already looking forward to the next chapter in my career. I would like to thank BMW Motorrad for this opportunity to ride on the international stage and will be out to repay the faith they have put in me, in the form of good results.”