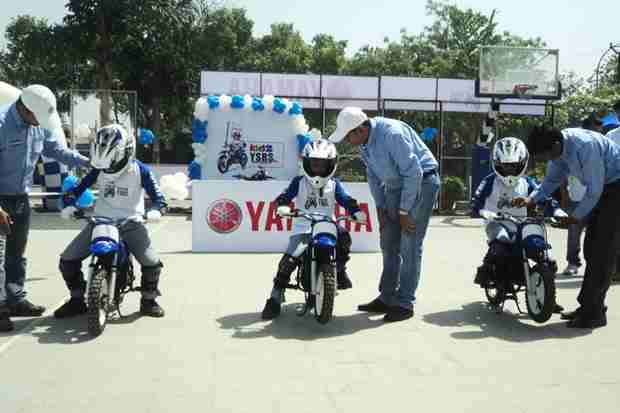 Yamaha Safe Riding Science programme has made progressive headway ever since its inception in 2008. After having successfully conducted similar programmes in 13 cities last year, Yamaha’s Safe Riding Science program has made its way to Pune now. The Kidz YSRS training session held at RIMS International School yesterday, was attended by 100 enthusiastic students between the age group of 8 to 13 yrs. A similar YSRS training session was conducted in Nagpur, early last month.

The day long program held yesterday was divided into 2 sessions, 1st was a classroom session or theoretical session and 2nd was a practical session wherein the kids were taught the basics of road safety, importance of using the proper protective riding gear and also how to ride a bike with the Yamaha TTR 50 and PW 50 bikes for kids. The programme took place under the expert supervision and guidance of licensed trainers.

The program is a part of the YSRS campaign organized by Yamaha every year to make young kids aware of the importance of safe riding and how imperative it is for a rider to adopt safety measures while riding a bike. The initiative has been developed in accordance with the company’s philosophy that safe riding habits can be inculcated only through a sound knowledge of the traffic rules and alertness on the roads, the training for which should start right from an early age.

Speaking on the occasion, Mr. Roy Kurian, National Business Head, India Yamaha Motor, said, “Yamaha has been promoting road safety/ safe driving habits since almost four years now. The company believes that it is imperative that the knowledge and importance of road safety is instilled in the youth of the nation as they are the key drivers in bringing about any change. Hence, we started the Kids YSRS activity in 2008 to involve the youngsters in an entertaining and interactive manner that would drive home the key messages of safe riding. By doing so, we are not just creating awareness amongst children but also amongst the local communities in the proximity. We want to teach the children, the nuances of riding safely so that when they grow up and start riding bikes they are well aware of traffic rules, road safety and proper riding techniques. It gives us immense pleasure that the programme has proven to be a huge success since its inception.”

After having successfully launched the Yamaha Safe Riding Science (YSRS) programme in India in 2008 across multiple cities, namely Delhi, Mumbai, Bangalore, Chennai, Pune, Nagpur, Dehradun, Guwahati, Vishakapatnam, Jammu, Ahmedabad, Jamshedpur, Kolkata, Lucknow, Udaipur, Varanasi and Goa, the company now plans to take the programme forward to smaller towns and cities. Yamaha hopes to have a wider reach among bike riders in such towns and cities where the two-wheeler market is considerably large and the need for spreading awareness about basic riding habits is necessary.