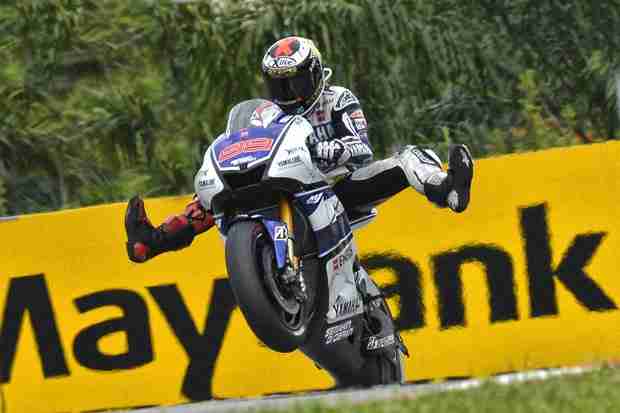 Yamaha Factory Racing’s Jorge Lorenzo left it until the last moment this afternoon to smash the Sepang track record with a scorching pole position run ahead of tomorrow’s Grand Prix of Malaysia, his third successive pole in a row. The Championship leader had shown good pace from the start of the session but dropped off the provisional front row as a flurry of late laps saw a number of riders including Andrea Dovizioso and Dani Pedrosa take the top spot. As the last minutes ticked away Lorenzo reclaimed the top spot from Pedrosa with a stunning 2’00.438 then immediately followed it with a flying final effort to deliver a new pole record for the Sepang circuit of 2’00.334.

Fellow Yamaha Factory rider Ben Spies was quick to get on the pace in the session, climbing to fourth just off the front row and looking threatening to break into the top three. As the session wound down a succession of hot laps and pole position changes from rivals saw him drop to fifth and then sixth for a second row start on tomorrow’s grid.

“We made a very good lap at the end of the session with the new ‘qualifying’ tyre. In the middle of the practice we struggled a little bit because we had a bit of chattering and the rear tyre wasn’t working as well as it had been in the morning session. We need to still work a little on our pace as it’s not extremely good yet but we have some options for tomorrow. Let’s see what happens, it’s going to be a long race in difficult conditions.”

“Qualifying was good, we had good pace in early in the session but when it came down to putting in that one fast lap we didn’t quite have enough. We also wanted to bring the bike back in one piece and not a broken one like we’ve done a few times this year. We’re looking forward to tomorrow and getting stuck into the race.”

“Pole again, number 51! It hasn’t been the best qualifying session of the year so to get pole at the end is great. We had some problems initially and Jorge had to go in and out a few times. He did his qualifying stints on the soft front tyre which is quite unusual so let’s see what we can solve to make us better for tomorrow.”

“Another impressive pole position from Jorge, he really wanted to show everyone that he’s not here to get second place if he can help it. Overall no major problems so far this weekend and there’s pretty good pace on both sides of the garage. A lot is going to depend on the weather conditions tomorrow; it’s going to be a really tough race. Hopefully we will see a great spectacle!”