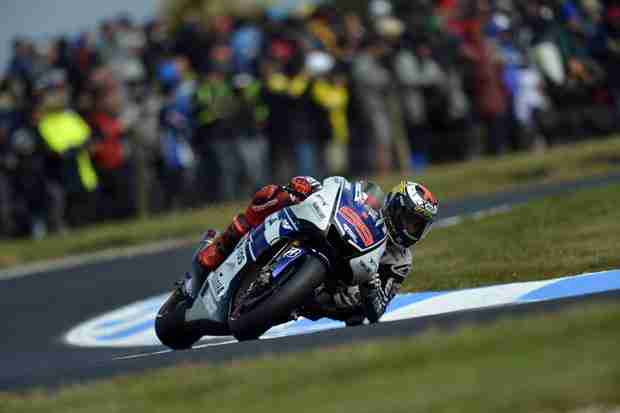 Yamaha Factory Racing’s Jorge Lorenzo took advantage of slightly less windy conditions at Phillip Island today to secure second on the grid for tomorrow’s Grand Prix of Australia. Lorenzo made big steps forward in set up thanks to hard work from the team overnight, enabling him to get nearly half a second closer to pole man Casey Stoner and nearly half a second faster than Championship rival Dani Pedrosa who sits behind him in third on the grid. Having dropped outside the top three initially, Lorenzo came back with an impressive 1’30.140 lap with a very used tyre to take second. Shortly afterwards the rain began to fall, preventing any further efforts to improve on lap times.

“Casey is really on another planet here, he’s riding so comfortably, sliding a lot and full throttle always so it’s very difficult to be with him. We are closer now though; in qualifying I made a really good lap with the soft tyre. Second place is a good position to be in for tomorrow, it’s important to be just behind Casey into the first corner and to follow his wheel for at least two laps as fast as we can be. A big thank you to the team who worked hard to improve the bike for me for today.”

“After yesterday’s practice we were not so positive but today we made quite some improvements, the guys worked really hard so hats off to them. We changed the bike quite a lot and Jorge felt a lot better with it this morning. The qualifying went quite smoothly, Casey is again half a second faster but he’s risking a lot and he has the feeling and the speed. Jorge is doing really well and it seems like we have a good package to fight with tomorrow.”