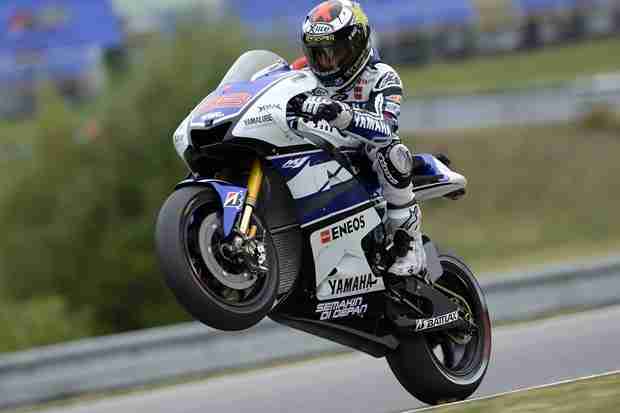 Yamaha Factory Racing rider Jorge Lorenzo took pole position today for tomorrow’s Grand Prix of Czech Republic with a stunning pace at the Brno circuit. The Championship leader had struggled to find form in the free practice sessions before reverting to the first ever set up used in the first 1000cc M1 test last year. The change bought immediate results, Lorenzo smashing the Brno lap record with a stunning 1’55.799 time.

Team mate Ben Spies was also on top form for the qualifying session. The Texan was often the fastest man through the first two splits and looked a definite to complete a Yamaha front row for tomorrow’s grid until a last lap effort by Dani Pedrosa moved him to fourth on the second row of the grid. Spies wrapped up qualifying just 0.004 seconds from a front row start.

“We were struggling so much to find the way to set up the bike this morning, we were very lost. Then we went back to the setting we used the first time we tried the 1000 here in Brno last year and it was great. I really enjoyed riding the bike, sliding more as well with less electronics. I just wanted to stay out on the track and just keep riding and riding to improve the lap time.”

“Overall that was a pretty good qualifying session, I made a couple of small mistakes on a couple of hot laps which I think could have put us on the front row. The bike and team are working really well and we’ve got a good pace for the race so I’m hoping for a trouble free day tomorrow to see what we can do.”

“A fantastic qualifying, the lap record and pole position is great. We solved some problems for qualifying and gained some grip in the rear which is the main difference from the other three sessions. Hopefully tomorrow it’s going to be a dry race.”

“A fabulous pole position from Jorge, he had a really impressive second part of qualifying. Unfortunately we missed the front row with Ben thanks to a last lap from Dani Pedrosa. Despite this Ben is very consistent and his pace is good. The set up is pretty much done so we are optimistic that tomorrow we will see a good race.”