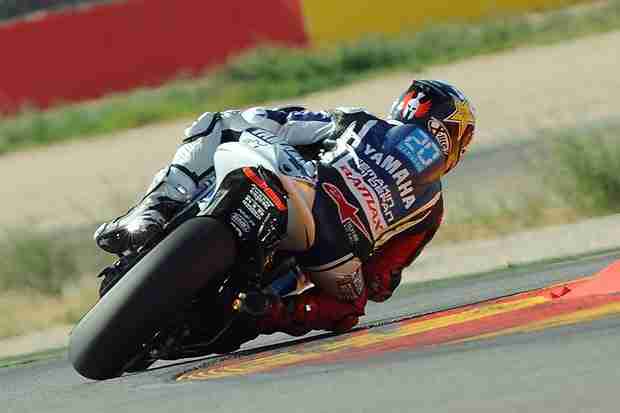 Yamaha Factory Racing riders Jorge Lorenzo and Ben Spies today completed the second of two days of testing at the Aragon circuit in Spain. Current Championship leader Lorenzo spent the first of the two days testing chassis settings and day two a different engine specification along with general bike settings to prepare for the Aragon Grand Prix later in the month. Team mate Spies worked throughout the two-day test to improve both the general base set up of the YZR-M1 and also to focusing on specific race set up and tyre life for the Aragon Grand Prix. Both riders wrapped up the test this afternoon with a race simulation run.

“Today was a very long day, we made a race simulation at the end of the session so I feel very tired but it was necessary to see the performance of the rear tyre. In general we leave here with happiness and confidence as we’ve been one second faster than last time. We need to try and improve consistency over race distance here.”

“We basically tested the bike over race distance here and completed a race simulation to set the bike up with a focus on the end of the race. We worked on some different fork and shock settings and a little bit of electronics but nothing major. We were mainly fine-tuning the bike and the results seem good. I’m positive for the rest of the year. The package we have now was good over the race simulation so I’m optimistic for the race.”