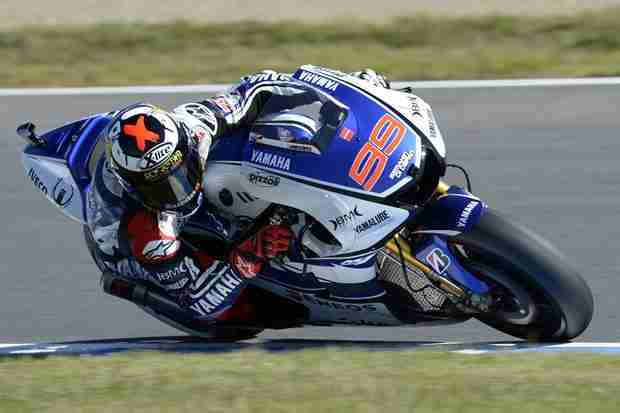 Yamaha Factory Racing’s Jorge Lorenzo left it until the last minute this afternoon to clinch a sensational pole position start for tomorrow’s Grand Prix of Japan at the Twin Ring Motegi circuit. The Championship leader was the first rider to break under the 1’47 second mark but was quickly followed by a number of rivals all pushing the lap times down. Provisional pole was repeatedly taken from one rider to another with Lorenzo waiting until the last moment with his last lap to deliver an unbeatable 1’44.969 to take pole position. The lap is a new pole record for the track and makes the 50th pole of his career.

Fellow Yamaha Factory rider Ben Spies was also on top form this afternoon, echoing his teammate’s pace to join the front three riders scrapping for pole position. Just after mid-way through the session the Texan was on provisional pole nearly half a second clear of the pack. As the final minutes passed a front row looked definite and a Factory one-two a real possibility until a small mistake dropped him to fourth on the grid, just 0.367 from pole.

“I’ve been really fast all weekend with a very good pace but in qualifying, ten minutes to the end I thought I was making a very good lap but I was in sixth position! I didn’t understand how the other riders were going so fast. I needed to push a bit more, in the second to last lap I made a mistake so in the last lap I had my last chance. I made it so I’m very happy but of course the important thing is the race tomorrow.”

“It was a good session for us, we made a small mistake at the end but the pace of the bike is good. By the time we got to the third rear tyre the front was a little bit past the limit but we were still pushing because I thought we could get on the front row. On the second tyre I made a small mistake on the hot lap which is a shame because I think that lap could have been close to pole, definitely the front row anyway and maybe a Factory Yamaha one-two. Fourth is good though as we now have a starting position so I’ll give it my best for a good start and get on the back of the guys and see what we can do.”

“A great qualifying, pole is very important. It was a very intense session. There were a lot of pole position changes at the end and we dropped a few places. For Jorge to come back and do that lap in the last minute was very exciting. The team has worked really hard this weekend to deliver a really competitive bike from the start.”

“There’s no better way to start the race than from pole, especially at a Honda circuit. Jorge made an impressive lap, he had a good rhythm then the last lap was amazing. Unfortunately Ben fell during what was possibly his best lap. Anyway he has a good feeling and is satisfied with the bike set up and tyres so I think it’s going to be a really interesting race.”