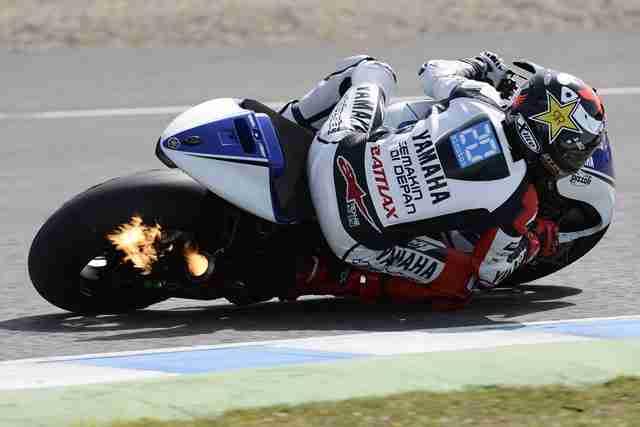 Yamaha Factory Racing rider Jorge Lorenzo wrapped up the final pre-season test of 2012 today in Jerez with an impressive 84 laps covered. Lorenzo spent almost the entire day as the only rider to drop under the 1’39 mark, with rival Casey Stoner joining him to lead by 0.173 seconds in the last moments of the session. The Mallorcan delivered an impressive race simulation, showing his trademark lap time consistency over the distance.

Team mate Ben Spies also covered some distance, putting in 61 laps as he worked on final set up solutions for his 1000cc YZR-M1. The Texan ends the test as the fourth fastest rider, 0.715 seconds from the front. Spies also worked on a race simulation earlier in the test and was satisfied with a competitive pace.

The MotoGP paddock now moves to Qatar where the first race will be played out under the floodlights in the desert on the 8th April. With the gap to their rivals much closer than last year in testing, both Yamaha riders are keen to line up on the grid and get the season started.

“I’m really happy because we tried to make some good lap times so we put new tyres on the rear this morning to make the 1’38.9 which is a good time. This afternoon we improved the bike for a race simulation which went really well. In general we are very happy, it’s not just me, Ben is also very close to the competition as are Cal and Andrea. We need to improve our braking a little, if we can do that we could gain some more tenths of a second.”

“I’m happy with how the test went. Both Jorge and I worked really methodically on getting through a number of different things, I think we’re quite happy with the bike going to Qatar, it’s been good here and good in Sepang. A couple of the areas where we had problems last year seem to be a lot better. We can’t say if they are completely fixed until we go to more tracks but we are happy with the balance of the bike and I think we have a very competitive bike for 2012.”