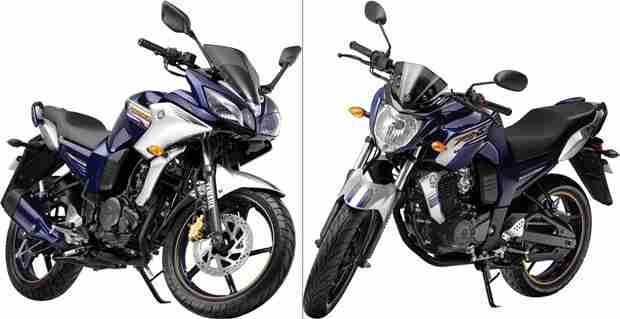 India Yamaha Motor has launched the limited edition versions of the FZ-S & FAZER bikes to boost sales and create more excitement amongst customers during the upcoming festive season. Both the limited edition FZ-S and Fazer bikes have undergone cosmetic changes involving new logo and paint finishes across the motorcycles. Both the bikes come in striking blue colour with Limited edition logo on it. The 2012 Yamaha FZ-S Limited Edition model is priced at INR 73,030 while the Fazer will cost INR 78,130, both prices reflecting ex-showroom Delhi figures.

Since the launch of FZ series in 2008, these bikes have gained popularity amongst youngsters. Yamaha launched the limited editions of the FZ-S and Fazer bikes keeping in mind these young and enthusiastic customers who are always looking to upgrade to a more stylish product to suite their ever changing fashion statement and personality. The engine specs of both limited edition Yamaha FZ-S as well as the Yamaha Fazer remain unchanged with the same 153cc, air cooled-single cylinder four stroke engine doing duty.