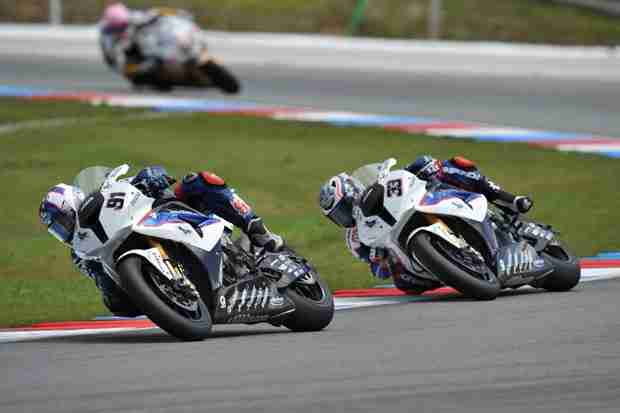 Two weeks after the historic success in the Czech city of Brno, the next challenge awaits Team BMW Motorrad Motorsport. This weekend (3rd to 5th August) sees the riders travel to iconic Silverstone (GBR) for the tenth round of the 2012 FIM Superbike World Championship. In Brno, the team and factory rider Marco Melandri (ITA) claimed a clean sweep for the first time, winning both races at the ninth round of the World Championship and propelling BMW to the top of the Manufacturers’ Championship for the first time. Marco and team-mate Leon Haslam (GBR) scored 68 points for BMW Motorrad Motorsport — a new team record. As such, the team arrives in Silverstone with the wind in its sails and is looking to kick on from this success.

BMW leads the Manufacturers’ Championship with 292 points, two more than its closest rival Aprilia. In the Riders’ Championship, Marco currently lies second with 250.5 points. The Italian has already won five times this season — more than any other rider. Marco’s two wins in Brno saw him close the gap to leader Max Biaggi (ITA) to 21 points. Leon is sixth on 160 points. Nine race weekends into the season, Marco and Leon have scored five wins, 13 podiums and three fastest laps for Team BMW Motorrad Motorsport.

Leon has been promoting his home race at Silverstone with a rather unique campaign. He allowed two-time body painting world champion Carolyn Roper to paint his BMW Motorrad Motorsport racing leathers onto the top part of his body and arms. Star photographer Gary Prior then captured the fascinating work of art during a photo shoot in one of the Silverstone garages. A time-lapse film was also taken of Leon being painted, which Silverstone is using to advertise the coming race weekend online.

“I am really looking forward to Silverstone. I like the track very much. It is one of the fastest and longest circuits of the season. You have a lot of fast corners, so you can adopt a flowing riding style. Last year I was on the podium there twice. It will certainly be not easy, as the track is very bumpy, but I am confident. I cannot wait to ride there with my RR.

I am just trying to keep consistent, to think from race to race and to have fun riding. I hope that we will challenge for the podium again at Silverstone and we will try to get some more wins. However, it will certainly not be easy because all the English riders want to win there. Carlos Checa will also be pushing for the victory and Max Biaggi will be strong too, so it will be very exciting races.”

“I am very positive about the weekend. Silverstone is synonymous with racing back in England, but is also means that we have left the two bogey circuits behind us. The last couple of rounds have been tough but I feel that we took important steps and can now get back to normal and to winning ways. There is no better place to do that than at my home race. Silverstone is very flowing and one of the fastest circuits in the calendar. It is very technical and has some real high-speed corners. That makes for good racing.

The body painting took three hours and was great fun. Carolyn painted my leathers on my skin and did a fantastic job. The attention to detail was incredible. It was the first time I had done a body painting and I was really surprised by how real and how good it looked.”

“The whole team is looking forward to Silverstone, a race track where both riders have performed well in the past. The British circuit, with its unique layout and a surface that used to be bumpy, could be a tough challenge for our team. You also have to consider the unpredictable weather. However, we are confident that both our riders will be fighting for the top positions and put on a great show for all the passionate spectators.

Marco is in fantastic form and has won the last three races. He and his crew will work hard to be fast from the first practice on. We are thinking from race to race, knowing that the competitors are very strong and ready to take any opportunity. Silverstone will be Leon’s home race and he knows the track better than any other riders. After what he has shown at the last two races on circuits where he had struggled in the past, we are convinced that the British track will be the right place for him to get back to challenging for the podium, which is where he deserves to be.”

Silverstone from Pirelli’s point of view:

For the tenth round of the World Superbike Championship, which will be the second round held on English soil, in addition to the ever present intermediate and wet solutions, Pirelli has decided to bring three different solutions for the riders to choose from on the front and just as many for the rear. On the front, besides the SC1 and SC2 range of solutions, there will also be the choice of the P1280, which is an SC1 development already used this year at Donington, Misano, AragÃ³n and Brno. The three alternatives for the rear, on the other hand, fall into the SC1 area as compound type and are the same ones which were already used for the first English round at Donington.

These are the P1060 solution range which is joined by two developments, the by now familiar R302 which has become increasingly popular with the riders for various races this season, and the R551, a solution designed to prevent cold tearing which is typical in low temperatures. This solution was introduced and made its sole appearance during the weekend at Donington and Pirelli decided to bring it to Silverstone in the spirit of the development of future 16.5 inch tyres that the British Superbike Championship will continue to use next season.