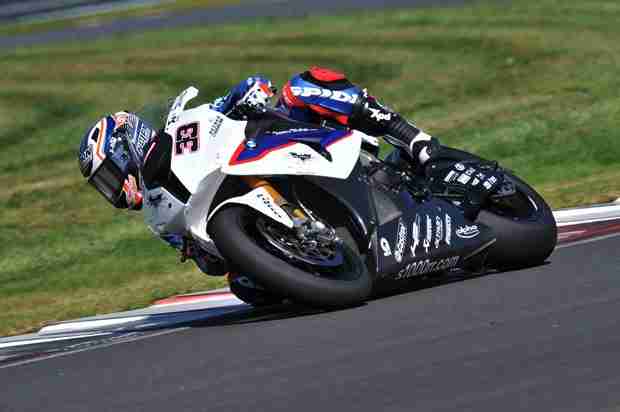 The wheels are rolling on the brand new “Moscow Raceway”: before the first ever Russian round of the FIM Superbike World Championship is held this weekend, Team BMW Motorrad Motorsport attended the official Infront testing today at the just opened circuit. The “Moscow Raceway” is located near the town of Volokolamsk, approximately 80 kilometers west of the Russian capital Moscow and was inaugurated on 15th July.

The test comprised two sessions, one of two hours in the morning and one of 2 hours 20 minutes in the afternoon. Both sessions had to be red flagged due to crashes. Factory riders Marco Melandri (ITA) and Leon Haslam (GBR) first got acquainted with the layout and the characteristics of the new circuit. They then worked with their crews on setting up their BMW S 1000 RRs for the coming race weekend. In total, the two BMW riders did 145 laps or 569.995 kilometres of testing today. Leon finished the day in second place in the timings, and Marco was fourth fastest. The best lap time was done by Carlos Checa (ESP) in 1:35.891 minutes. The weather conditions were good, with sunny skies, air temperatures up to 19 degrees Celsius and track temperatures up to 36 degrees Celsius.

“It was a good day. We had two fully dry sessions and we were working on finding a set-up for this new track and learning the gearing, the lines and many more things. So far the track is really fun to ride; it has many ups and downs. The corners are mainly first and second gear but it is a quite aggressive circuit and I like it. Regarding overtaking possibilities, the first and last corners are going to be exciting because of the two straights. I am confident for the weekend. We were pretty close to the top and concentrated on race set-up and were feeling pretty good on the hard tyres on race distance. We have much more to try and look forward to Friday when we go out on the track again, but so far so good.”

“The test was not too bad. The track is pretty fun to ride but I think it is quite small for Superbikes. The turns are very tight and so far I don’t think that there are many chances for overtaking in the middle of the track but we will see. The track is going to be faster day by day. Today we worked on the gearbox to try to find a good setting to make the bike smoother in the corners. On the long straight we can make use of the power of our BMW engine and gain a lot of time, but we are losing time in the corners. We now have to analyse what we did today and try to improve for Friday morning. Ducati seems to be strong here and for us it will not be easy but will do our best and we will see on Sunday.”

“It was good to have the chance to learn this new circuit with such nice weather conditions. That was what we needed to get familiar with the layout, the characteristics and the requirements of the track. Both riders have a good feeling and together with their crews they worked on the basic set-up. We had no reference for this track so they worked on the gearbox, the chassis set-up and the engine management. We still have a lot of work to do to be ready for the weekend but with the information and track time we have we are confident that we can improve even more on the good results we got today. There could be some issues with the durability of the front tyres due to the new surface so we are working on both the performance and race pace as well as tyre life to be consistently fast over the race weekend.”