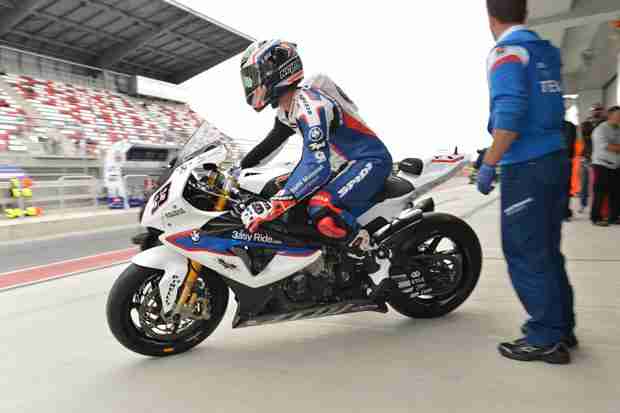 Team BMW Motorrad Motorsport showed a strong performance in today’s Superpole qualifying at the brand new “Moscow Raceway” (RUS). Despite yesterday’s issues with the soft tyres the squad qualified for the first and second rows. Factory rider Leon Haslam (GBR) will start the first ever Russian round of the FIM Superbike World Championship from fourth in the front row, followed by his team-mate Marco Melandri (ITA) who qualified fifth on his BMW S 1000 RR. In Superpole 1 and 2, Leon only made one outing each to progress to the next session. Both times Marco rode a time that qualified him for the next stage in the closing minutes of the session. In the deciding Superpole 3, Leon put in the fourth quickest time right at the beginning and held that position until the chequered flag. Marco started with the sixth fastest time but improved a further position, securing fifth on the grid. Michel Fabrizio and Ayrton Badovini (both ITA) of the BMW Motorrad Italia GoldBet SBK Team will start tomorrow’s races from 17th and 19th respectively.

“I am really pleased. It is always nice to be on the front row of the grid, and especially at Moscow where the first part of the track is quite twisty. Thanks to the boys who did a great job. It was hard work with the soft tyre. We did similar lap times on the soft tyre as with the race tyre, which is good for tomorrow. We made some good progress over the weekend and for me, we just need to do some fine tuning for the race and we can be strong. It will be difficult to overtake, but there is no one in front of me I don’t think I can’t beat. Carlos has a fast pace but he has one of the slowest bikes on the straight. Hopefully if I can get in front of him and hold him up in the bits where he is strong and then pull away in the sections where I am fast.”

“I am very happy because honestly I was pretty worried about qualifying. The good thing is that I have the feeling that we are in a quite good shape for the race. The negative thing is that we were still struggling with the soft tyres. It was difficult to make improvements. So for me to qualify for the second row was the best I could hope for and I am happy. A big thank you to my team. They really did an incredible job today. Now I hope to have a dry race tomorrow.”

“We managed the Superpole very well because we were worried about our performance with the soft tyre. For some reason it does not work well with the characteristics of our machine. We were worried that we would throw away the good job done so far due to the difficulties with the soft tyre and the consequent grid position. But both crews managed their issues and qualified on the first and second row which is always our target. Especially on a small and tight track like this where overtaking will be difficult. I am confident for tomorrow’s races because we have shown that with race tyres our pace is competitive.”