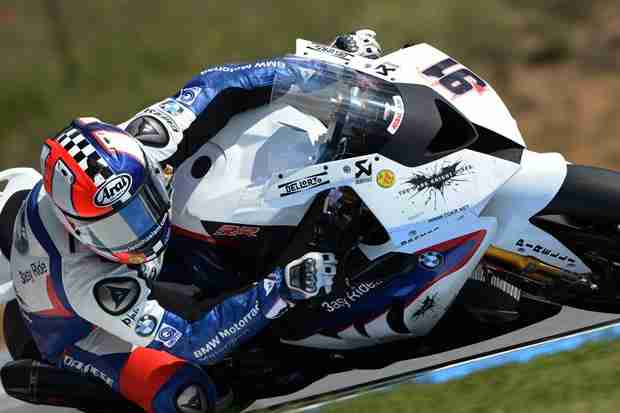 After a turbulent Superpole qualifying, the two Team BMW Motorrad Motorsport factory riders will start tomorrow’s races at Brno from the second row. The Czech track hosts the ninth round of the 2012 FIM Superbike World Championship. A delay of nearly one and a half hours and unstable weather conditions made this afternoon a challenge for riders and teams. Marco Melandri (ITA) qualified fifth, while his team-mate Leon Haslam (GBR) occupies seventh on the grid with his BMW S 1000 RR.

Marco, who almost missed the second qualifying practice in the morning due to a crash, only needed one flying lap on race tyres to set the best time in Superpole 1. He then returned to the garage and prepared for Superpole 2. Leon also started on race tyres and then switched to the qualifying tyre, setting a time that promoted him to the next session. Superpole 2 had to be red flagged after only a few minutes, as a bike had dropped oil on the track causing several riders to crash. It took one hour to clean the track and just when Superpole 2 was about to resume, light rain started. This caused another delay and Superpole 2 was declared “wet”, meaning there was only one session of 20 minutes in which the 12 riders fought for the final starting positions on the grid. In difficult conditions with a still partly dirty track and drops of rain it was a kind of lottery, with Marco finishing fifth and Leon being seventh. Michel Fabrizio (ITA) of the BMW Motorrad Italia GoldBet SBK Team will start from eighth place on his RR. His team-mate Ayrton Badovini (ITA) was one of the riders who crashed because of the oil. He could not take part in the deciding session and starts from 12th.

“Starting from fifth position here in Brno is not too bad. First of all, I start on the outside of the track which hopefully allows me to carry more speed into the first corner. On top of that, the way to the first corner is quite long, and last but not least, there are opportunities for passing on this circuit. Again, I did my fastest lap times on the race tyre and could not exempt the potential of the qualifiying tyres. Compared to yesterday, we improved the chattering on the race tyre, but I still struggle a little bit. I don’t think I could be much faster but have a lot better race rhythm. Overall, I am confident for tomorrow.”

“I am quite happy. This is one of the circuits where I have always had issues and slowly but surely we are getting a set-up for the bike and I am changing my riding style to try and get to where we need to be, which is at the front. We made a big improvement for Superpole and hopefully we can make some more improvements for tomorrow. The conditions in the afternoon were quite tricky, with the rain coming down and oil on two corners so everyone was a little cautious. Some took more risks than others. The races will be hard, but we will keep pushing and if we can keep improving as we have done today then I want to fight for the podium.”

“It was a very thrilling Superpole. It is always important to be in the front two rows and we are pleased that we managed this by being in the second row with both riders. We are happy with the progress made by Leon on a race track where he has been struggling in the past. He has improved his pace and his performance. Still something is missing but we hope that during the warm-up tomorrow we can further improve some areas of the bike in order to be a few tenths faster on the pace. Marco has been fast all weekend and even though he had lost the qualifying session this morning, he and his crew were able to work well on the bike’s set-up. Also his performance has improved compared to yesterday as we have seen with the lap time done in Superpole on the race tyre and his pace is one of the best. It is a pity he cannot start from the front row but we are confident that, as usual, he will perform well during the start and he will be fighting for a race win.”