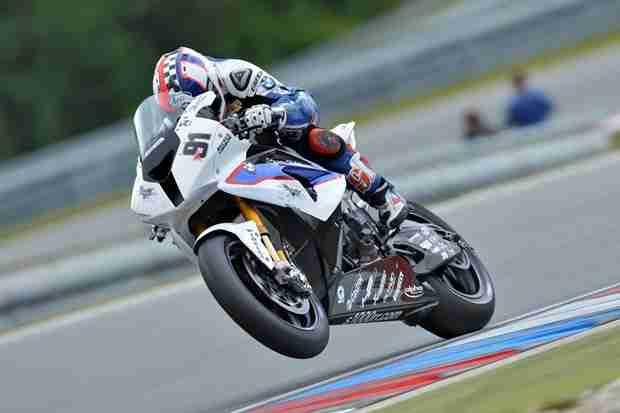 At the ninth round of the 2012 FIM Superbike World Championship, Team BMW Motorrad Motorsport qualified for the provisional front row. Factory rider Marco Melandri (ITA) finished today’s first qualifying practice at Brno (CZE) in second after being quickest for some time. His team-mate Leon Haslam (GBR) had bad luck with the unstable weather and qualified provisional tenth on his BMW S 1000 RR. 15 minutes into the session, light rain started to fall which initially had little impact on lap times but when Leon was on a quick lap with six minutes to go, the rain got heavier and it was no longer possible to put in the fast lap times. BMW Motorrad Italia GoldBet SBK Team’s Ayrton Badovini and Michel Fabrizio (both ITA) finished the session in seventh and eighth respectively.

“We worked on the set-up of the bike and found some good solutions. In general, the bike is working well but we are struggling again with chattering. It is not easy, because we don’t know exactly what is causing the issue but we are going to work on it tomorrow. We will try to improve it and also work with the tyres and then we will see.”

“It was a bit of a rush this morning as we had a lot of tyres to test and we knew that it could rain today and tomorrow but we tested all the tyres and did what we had on our list. In the first qualifying practice both times that I was on a good lap the rain came. That wasn’t ideal for me but we are not so far away. We’ll certainly need to keep working, but anything can happen on Sunday. Today’s times were strange anyway because some riders who are always fast here were only in the middle of the times. But I think everyone was working on race tyres and race set-up. We’ll see what the weather does tomorrow.”

“The weather forecast for tomorrow is not good, so our day was very busy. We had to squeeze a lot of items’ tests into the first free practice session. We evaluated the different tyre compounds and dimensions, and both riders worked on the chassis geometry. Compared to the morning session, Leon made a step forward with the chassis set-up in the afternoon. Now his crew and him need to improve on the electronics setting for better rideability. Marco’s side as well worked on the geometry of the bike and the weight distribution. Marco already has a clear idea for the race tyre, and he proved to be consistently fast. Still, Marco struggles a lot going into the corner due to the vibrations he is complaining about. We hope for good weather that we can continue with the work to be done.”