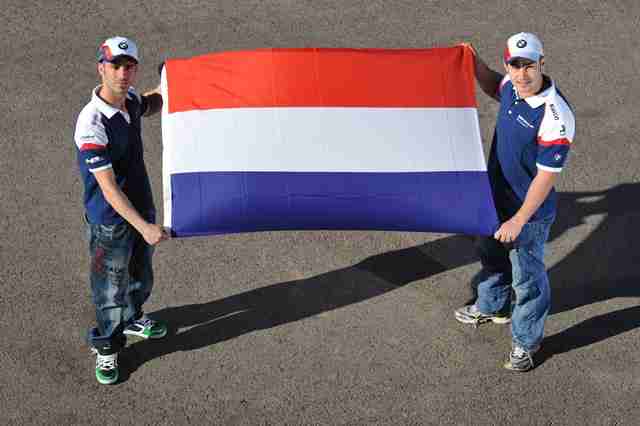 Team BMW Motorrad Motorsport heads to the Dutch province of Drenthe for the next race weekend. The iconic “TT Circuit” in Assen will host the third round of the 2012 FIM Superbike World Championship from 20th to 22nd April. The team, with factory riders Leon Haslam (GBR) and Marco Melandri (ITA), is looking to continue the fine form it showed in the opening two rounds of the season.

The season-opener at Phillip Island (AUS) saw Marco finish runner-up in his very first race on the BMW S 1000 RR — the team’s best individual result so far. At the second race weekend in Imola (ITA) it was the turn of Leon to turn on the style: the Brit’s two third place finishes secured BMW Motorrad’s first double podium in the Superbike World Championship. Despite the season still being in its early stages, the pair has already amassed 93 world championship points for Team BMW Motorrad Motorsport. Leon currently lies in fourth place in the Riders’ Championship on 47 points, with Marco just one point behind him in fifth place on 46 points. In the Manufacturers’ Championship, BMW is fourth with 63 points after two race weekends. Only the best result from each race counts towards this championship.

On the Monday after the race in Imola, Team BMW Motorrad Motorsport took part in the official Infront Test at the Italian circuit. The team and the two riders were happy with their progress: Leon and his crew worked successfully on several areas, including the electronics set-up, and tested various adjustments to the chassis of his RR. Marco and his crew managed to reduce the high-frequency vibrations that had occurred previously on his bike. The team will be testing again this week in Mugello, Italy, as it continues its preparations for the race weekend in Assen.

“Assen is one of my favourite circuits. It is one of the old tracks and has a lot of history. The circuit is very fast and flowing. It is more of an old-school circuit and always produces an exciting race. A lot of fans always come over from England, so for me the atmosphere is always great. Last year we made a mistake in race one and crashed. In race two we had a top-five finish. So the bike can definitely be good at Assen and I am actually looking forward to going there with our new RR and the new set-up.

The bike was very stable in the first races in Australia and Imola, and we can see where we can make improvements and what we need to work on. I am really looking forward to every race from now. We are getting closer and closer to that first victory. If we get the chance to win, I am certain we would take it. In Imola we were less than three seconds from winning. Although we had some small issues there, we made it on to the podium and were very close to the front guys. This is all very positive and hopefully we can continue this at Assen.”

“I have very good memories of Assen. I celebrated my first victory in the 125 cc World Championship there when I was 15, so it is a really special racetrack for me. Unfortunately the track now is much shorter. It is not the same as it was before. The old Assen was awesome. The last part of the new circuit is very nice, but the first part is quite narrow and very slow.

At the test at Imola we found some good solutions. I am now more confident and hopefully we can see the result of the work we have put in as soon as Assen. I hope to have two good races and to fight for the podium. In any case, me and the team we will give our all.”

“After the double podium we achieved at Imola and the positive test we completed there on the Monday after the race, we are now looking forward to the race weekend at Assen. The ‘TT Circuit’ is an historic racetrack with a tricky, flowing layout and many changes of direction. It requires the rider’s full concentration and does not give him any time to breath. The circuit’s characteristics require a bike that not only handles well in the fast corners, but also in the tight hairpin. And you always have to be prepared for the unpredictable Dutch weather. However, we are convinced that our riders and our BMW S 1000 RR are ready for this tough challenge.

Both riders are highly motivated and focused. Leon and his crew want to build on the successful weekend they had at Imola, and with the same approach he will be able to fight for the top positions again at Assen. Marco is determined to leave the disappointment he experienced at his home race behind him. In Imola, the circumstances did not allow him to show his talent and his potential. But at the Monday test, he and his crew were able to find a solution for their issues and, as a result, we are confident that this time he will also challenge for a podium finish.”

Pirelli will take a total of six solutions to the Dutch round: two for the front and four for the rear. The two solutions for the front are the standard SC1 and SC2 for 2012, which were already used in the first two rounds of the Superbike World Championship. For the rear, on the other hand, the riders will be able to choose from four options: an SC0 supersoft introduced at the NÃ¼rburgring in 2011, two SC1 solutions including the R300, which was introduced and used by various riders for the Imola round, and an SC2 which is suited for colder temperatures. With these four solutions on the rear, Pirelli is able to offer a wide range of choices for the riders no matter what weather conditions they find at the Assen circuit.

Although the track has been altered a bit in recent years, losing some of the fast chicanes, it is still a track with very aggressive asphalt but good water drainage, capable of drying off quickly in the event of rain, since it is in an area that is traditionally exposed to the wind. Even more than at the Phillip Island round, the track here is very diversified, with dry sections sometimes alternating with moist or wet asphalt, so it is a track where the teams’ tyre selection can make all the difference.

BMW Motorrad factory rider Marco Melandri (ITA) has good memories of Assen. In 1997, as a 15-year-old, the circuit was the scene of his first victory in the 125cc World Championship in his first year in the series. That triumph made him one of the youngest riders ever to win a Grand Prix. His team-mate Leon Haslam (GBR) has also claimed several podium finishes in Assen, and is looking to repeat the feat with the BMW S 1000 RR.