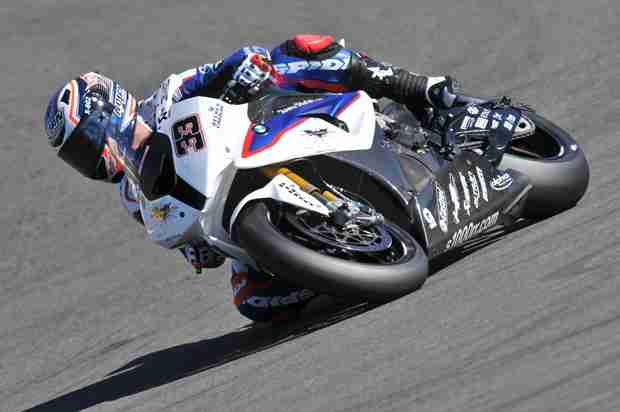 Team BMW Motorrad Motorsport heads to the south of Portugal this week, as the season enters the finishing straight. The “AutÃ³dromo Internactional do Algarve” will host the penultimate round of the 2012 FIM Superbike World Championship from 21st to 23rd September. The circuit, which was opened in 2008, welcomes the Superbike World Championship for the fifth time this season.

The BMW Motorrad factory riders have good memories of the Algarve: Marco was making his debut in PortimÃ£o last year and claimed victory in the second race. Leon has finished on the podium on three occasions in Portugal. The Brit injured his left shoulder and elbow in crashes in Moscow (RUS) and at the NÃ¼rburgring (GER). However, as medical examinations confirmed last week, these injuries are fortunately not serious.

“It looks like we are going to have good weather at Portugal, which I am very happy about. I certainly expect tough races. There are just two rounds to go and the championship is still very open for quite a few riders, so it will be not easy but very interesting. I will approach the weekend as I always do. In preparation I trained a lot back home and in PortimÃ£o I will try to enjoy the ride. The whole team and I will do our best and just try to be consistent and fast in both races.

PortimÃ£o is one of the most beautiful race tracks in the world. The layout is unbelievable. There are up and down sections like you find on no other race track and the corners are pretty fast. Last year I was racing there for the first time and I had a good result. The races are not going to be easy because it will definitely be close between many riders.”

“Germany was pretty tough; I landed on my shoulder in two more crashes. I had some MRI scans, the outcome of which was quite positive. There is no tendon damage, just at the ligament and some fluid in the joint. It is nothing that a rest before the next race in Portugal won’t sort out. I also had a virus in Germany, so last week I was recovering from that too. I have spent some time relaxing and am now looking forward to PortimÃ£o.

The race track is very different; it is very up and down and quite aggressive. It is one of the circuits I have enjoyed in the past. Last year we had a tough time but during the tests we have done there over the winter we were quite competitive so I am looking forward to returning with this bike. As always we will push for the win, which we know we are capable of. We just need a little bit more luck and then we can achieve that target.”

“After the difficult and unlucky races at the NÃ¼rburgring we are all looking forward to PortimÃ£o. The whole team is highly motivated to win back the points we have lost during the two races on German soil. The Portuguese race track, with its uphill turns, downhill braking and the never-ending elevation changes, is the perfect playground for our riders and crews. It will be demanding for the tyres and for the riders, whose riding skills and physical condition will face a tough test.

Leon’s shoulder and elbow injuries, ‘mementos’ from the recent crashes in Moscow and at the NÃ¼rburgring, were worrying all of us. However, we are now confident that after the medical treatment and a few days rest he will be able to show all his talent. Leon knows the podium in PortimÃ£o well, having been on it three times in the past. Marco also has a special memory of the Portuguese track; he won the last race of the 2011 season there. He has already forgotten the unlucky German races. Now he, like all of us, is very motivated and convinced that our package will be competitive again in Portugal. It will be a difficult weekend, our competitors are becoming stronger and stronger, but we are well prepared and ready to fight!”

PortimÃ£o from Pirelli’s point of view

For the penultimate round of the 2012 Superbike World Championship Pirelli will once again provide the riders with multiple slick solutions as well as intermediate and wet tyres and the Superpole qualifier. More specifically, there will be three alternatives on the front: two in the SC1 compound (the N1159 as the 2012 standard SC1 and the P1280 as an alternative development solution) and one SC2 mid-hard, the P773, which has already been used during the season on various occasions.

For the rear, on the other hand, Pirelli is bringing five different tyres. There will be two in SC0 compound, two in SC1 and one in SC2. The two SC0 solutions are the R874 in an oversized profile version and the R548, both already used for the Brno round. The 2012 standard SC1 (P1060) will join these, as well as the development tyre, the R302, both already widely used in other rounds of the 2012 season. The final alternative for the rear will be the SC2 N1157 for use in the event of very low temperatures. The “AutodrÃ³mo Internacional do Algarve”, a 4,658 metre track with nine right hand turns and six left handers is definitely one of the circuits that most enhances the ability of a tyre to perform in very different conditions due to the various uphill and downhill sections and the different radius turns.