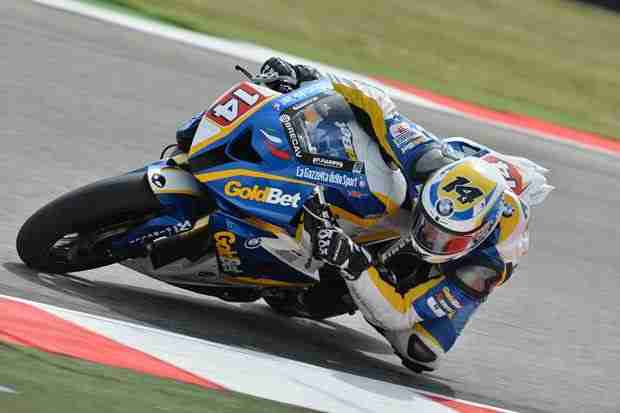 The BMW Motorrad Italia GoldBet Superbike Team scored the best results of its short Superbike history at the Misano round Superpole today. Ayrton Badovini has got a front row starting position and will start from the third grid slot tomorrow. Michel Fabrizio starts from twelfth in the two races scheduled for tomorrow at 12pm and 3pm. In the FIM Superstock 1000 Sylvain Barrier, despite his far-from-perfect fitness, finished qualifying with a seventh place while Lorenzo Baroni managed to claim fourth place on the grid and will start from the first row.

Due to a short burst of rain just before the start, it was a wet Superpole with two sessions of 20 minutes each. The quickly improving weather conditions allowed the teams to use slick tyres from the start so lap-times continually improved with time throughout the sessions. Ayrton Badovini got the best out of the two Superpole tyres available, finishing Superpole 1 in the top eight with a time of 1’36.949. By setting a very good 1’36.083 lap in the following session, on his penultimate quick-lap attempt, he reached a historical third starting position for the two Sunday races.

The 1’37.806 didn’t allow Michel Fabrizio to qualify for Superpole 2. The “Gladiator” will start the race from the twelfth position on the starting grid, third row, and tomorrow morning will try, with the team, further modifications to the bike set-up.

“It’s the best result of our short sporting history, but it matches the competitiveness of our 2012 package. Despite being a provisional result it gives enthusiasm and motivation to the team, which deserves this achievement for the determination given so far. Ayrton was brilliant and it seems that he got back his poise which has always been his strongest virtue.”

“It’s been a semi-positive day. Ayrton’s performance in Superpole was outstanding. He managed the two sessions in the best way. He truly believed he had the chance to do well and he achieved a good result which is a confidence boost for tomorrow and the rest of the season. I must also congratulate the team for the perfect strategy in a Superpole session that certainly wasn’t an easy one. Michel still struggles to find the right comfort and so race-wise we need to find a way to help him recover from twelfth on the grid.

We’re quite positive about Superstock 1000 as Lorenzo only needs to improve his third split. If he does that, a good result is possible. Sylvain is doing even better than expected considering his physical condition, so we’re happy with his second row start. Tomorrow he’ll need to focus on getting as many points as possible with an eye on the title chase.”

“I’m not happy with how today went, I was hoping for a better result but I have to settle for a third row start. Tomorrow morning during the warm-up we’ll keep working in order to get a better result in the race.”

“This weekend we’ve been improving every time we went on track but I was not expecting a third place start for the race. After getting the right lap with the qualifying tyre in Superpole 1 I spoke with the guys and we decided to give all we had and to be bold. This approach has paid off and it gives us a confidence boost to try and do well tomorrow.”