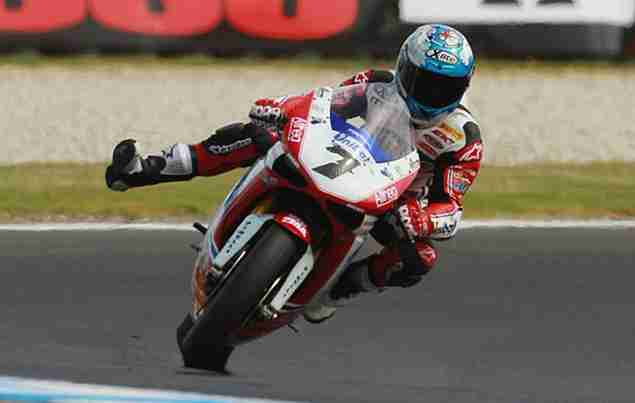 After two glorious days at the Enzo and Dino Ferrari circuit at Imola, today’s World Superbike’s Race 1 was under cloudy skies and a stiff cold wind blowing, Italian bookies had given the odds that Althea’s Carlos Checa would win the race and the Spaniard decided to prove it true by taking the victory in an exciting race with numerous two-rider battles, several costly errors and a pair of scary crashes.

Pole man Tom Sykes got the lead with Checa and Biaggi immediately tailing him, while at the back of the grid saw the first incident that involved Leon Camier who tangled with Kawasaki’s Joan Lascorz, the Spaniard survived to continue while Camier’s Suzuki lay in the dust at turn 5. On lap 2 Effenbert Liberty’s Sylvian Guintoli tried to pass Max Biaggi at the Tamburello coming into hard contact with Leon Haslam, the Frenchman crossed the chicane and on re-entering lost control & highsided bringing down Chaz Davies with him.

Sykes continued leading for almost half the race distance with Carlos Checa playing elastic, but never really losing contact until lap 12 and at the bottom of the Acqua Minerale in a text book pass overtook the Kawasaki rider and then sprinted away leaving Sykes to take a comfortable second place. Max Biaggi struggled through the race losing contact with the two front runners but seemed safe for a third place podium, until a hard charging Haslam came up to the Aprilia rider and after nosing around the tail of the RSV4 for several laps decided to pass the Biaggi on the 16th lap, but the Italian regained the spot almost immediately, but at the Villeneuve repeated his pass which stuck and they crossed the finish line in that order, Haslam third and Biaggi fourth.

Eugene Laverty finished in fifth on the second factory Aprilia, after struggling in mid-race, but he recovered enough to fight off several riders for the postion. Marco Melandri rode to an excellent sixth after a false neutral in lap 2 would send him off on the run-off of the final chicane where he had to wait (there is a stop light) five seconds before re-joining the rest of the field in 16th. Melandri edged out Joan Lascorz (7th) and both got the best of an excellent Lorenzo Zanetti who fell back to 8th following excessive tire wear. A bruised Jonathan Rea was 9th, while NiccolÃ² Canepa rounded out the top ten.