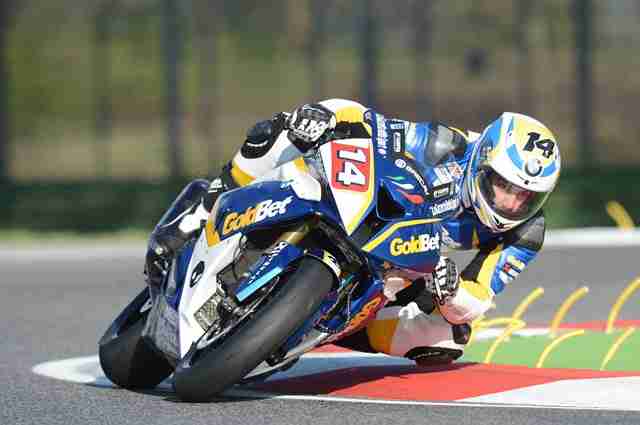 The BMW Motorrad Italia GoldBet Superbike Team has completed its final qualifying day of the second round 2012 World Superbike event at Imola and season opener for the FIM Superstock 1000 Cup. Ayrton Badovini will start tomorrow’s races from the fourth row, 16th place on the grid, while Michel Fabrizio, who finished 18th in qualifying, will begin from the fifth row. It’s been a good day for Lorenzo Baroni and Sylvain Barrier in the FIM Superstock 1000 Cup, as the two riders will start from the first row, thanks to taking third and fourth place today.

“It’s been a troubled day and we’re definitely not happy. A series of unexpected events didn’t help us to get the results we were looking for. Ayrton made some small mistakes in Superpole 1 and he didn’t get to the next session. He will have to work hard to climb up the classification during the two races.

Michel had a faulty sensor on the bike which forced him to spend a long time in the pits following which we have worked on finding the right balance on the bike for him. During tomorrow’s warm-up we will try to find new solutions so we can get back up where we belong. The first row slots claimed by Lorenzo and Sylvain in the Superstock 1000 class are a good result and we’re confident for tomorrow’s race.”

“I’m not happy with the result, as yesterday we lost a lot of useful time and today we tried to play catch-up. I worked a lot with the team, not only for qualifying but also race-wise. During the warm-up we’ll test new solutions to find the optimal balance of the bike. It’ll be tough, considering the starting position, but I will do my best.”

“I didn’t manage to get the best out the qualifying tyre during the Superpole and that didn’t allow me to qualify to the second session. I will start from the fourth row but fortunately the track has a lot of spots to overtake. I need to get a good start and to maintain a good pace to sort this weekend out.”