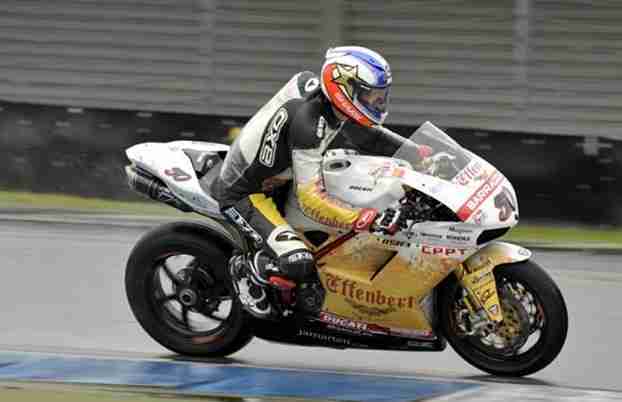 World Superbike Race 1 at Assen had something for everyone, with any of the previous predictions all being thrown to the wind, thanks to the crazy and unpredicatable weather conditions at the Dutch track. The start of race 1 was dry, with polesitter Tom Sykes getting the holeshot and immediately putting some space behind him, but there was a group of ten riders in an intense melee, battling it out and constantly jockeying for positions.

The first drama happened on lap 11, when leader Tom Sykes Kawasaki suddenly billowed white smoke and started to fade, which allowed Marco Melandri and Leon Haslam to catch him to up. Sykes was unaware that he was spewing something (it later turned out to be water) until the BMW Motorrad duo sandwiched him in a double pass with Haslam touching Sykes arm to make him aware of the situation. The Kawasaki rider would retire just a lap later. With Sykes out of the contention, Marco Melandri took the lead of the race and seemed to be speeding away while Sylvain Guintoli, Jakub Smrz, with Haslam, Carlos Checa, Chaz Davies, Ayrton Badovini, Jonathan Rea and John Hopkins fighting behind for their postions as the rain started to fall.

During the 14th lap, drama struck again when Marco Melandri at the De Bult corner hit a patch of wet and went sliding out across the grass, immediately followed by Smrz and Hopkins also caught out by the same patch of wet, while Rea and Davies miraculously managed to stay up right as they ran wide and off track. The race was immediately red flagged, with some controversy by Melandri who would later say, while waiting for the re-start and his team furiously trying to repair his damaged BMW, that none of the corner marshals had indicated the wet spots.

Since two thirdd of the 22 lap race hadn’t been completed, the riders had to return to finish the remaining nine lap sprint that starting in very treacherous conditions under an intense rain shower with a strong and cold wind blowing, and those remaining nine laps became simply a war of attrition (similar to Nurburgring last year).

The grid positions were determined by the 13th lap positions with Melandri on pole followed by team mate Haslam (Smrz who was to be second in the re-start, but his bike wasn’t repaired in time for the warm-up lap and had to start from the pitlane, while the second row saw Checa, Davies, Badovini and Rea.

In the end, it was Sylvain Guintoli who took the victory, his first, and managing not only to keep his Ducati upright, but also posting some fast laps, but only after Jonathan Rea crashed out of the lead at the Duikersloot, Leon Haslam inheriting the top of the timesheets. Haslam put more than 8 seconds between himself and the rest of the field only to crash out.

The lead then went to Carlos Checa who then made an error and dropped back giving the lead to Ayrton Badovini who then proceeded to bin his BMWwith just two laps to go, he handed the lead to a hard charging Guintoli who would retain it to the checquered flag.