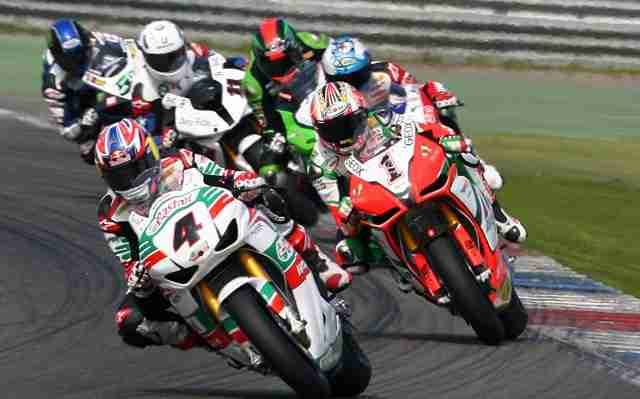 The third round of the World Superbike championship will be kicking off this weekend at the historic TT Circuit Van Drenthe at Assen. Carlos Checa currently leads in the points standings and he’ll be looking to repeat his Imola double victory while trying  to keep rival Max Biaggi at bay who is just four points away, while the Italian will be looking to break his WSBK Assen bad luck as he’s never won at this circuit (his only victories were in GP racing).

Tom Sykes on the Kawasaki ZX-10R is just six points adrift from Checa and he’ll want to build on the two Superpoles and three podiums he’s taken so far and help his team try to forget at least momentarily the drama of Joan Lascorz’s accident at Imola. ‘Jumbo’s’ bikes will be on display on the Kawasaki garage this weekend with the message “Animo Joan” and the latest rumors say that there has been a slight progress in Lascorz’s physical condition (who is now awake and breathing on his own and has some arm movements)

For Honda’s Jonathan Rea and Hiroshi Aoyama it will be their team’s home race as Ten Kate is located just 50km from the Assen circuit and the riders tested there last week and after Ducati (24), Honda has the most wins on this track, there latest being Rea winning race 1 in 2011. Everyone is expecting that the Crescent Fixi Suzuki team to do better in this round as they have received a new Yoshimura engine that they tested at the Imola post-race test and John Hopkins, while not 100% fit, should have recovered enough from his hand injury to compete at another level. BMW’s Leon Haslam and Marco Melandri are currently 4th and 5th in the standing and have just completed a private test at Mugello and are still working to bring the BMW S1000RR to its first ever victory in WSBKs after their respective podiums at Imola.

“Imola was a really fantastic event that couldn’t have gone better for me! I’m really happy with how it went, also because those points gained are vital for the championship. Now we must turn our attentions to Assen, where I hope to make two strong races before we head to Monza — that will undoubtedly be more difficult for the Ducati. Last year we did well at the TT circuit, a win and a third place — we’ll be aiming for similar results again this time around.”

“Imola was a weekend to forget as far as I’m concerned. I’ve continued to concentrate on training over the last weeks in order to be in the best possible condition to face the next races at Assen. I like the Dutch track and am feeling confident. I’ll work together with my team to and will be ready for two good races come Sunday.”

“We showed we had some speed at Assen last year, in terms of sheer speed. But, with the new balance we have found on the Ninja ZX-10R, I am confident we can keep things going in an even better direction this year. I got a chance to test after Imola but the track conditions were very poor at Valencia, as bad as I have ever experienced there. Even at the end of two days I was leaving a big dust trail behind me down the straights. We tried out some things on the bike and we still found a couple of things on the bike that we can use later in the season, maybe. And of course every bit of information we discover in testing is very useful to us. I have some good people working with me and they seem to be able to put all the data together into a race package, which is a great asset to have. They are always thinking ahead.”

“Racing at Assen is always special and that is why the races here are always memorable. It would seem that the weather wants to rain on our parade, but we’ll wait for Sunday and keep our fingers crossed.After an excellent start in Australia we struggled a bit at Imola, in any case managing not to lose sight of the frontrunners. This weekend we will need to solidify our lead, without losing focus even for one minute: from what we’ve seen so far, there is no margin for even the smallest error. The track is demanding but I like it. It’s technical and flows well, and demonstrating competitiveness here would be excellent confirmation for the rest of the season”.

“I’m back to 100% fitness and ready to fight at the front again. The beginning of the season has been tough but it’s now time to step up and finish consistently on the podium.We made a big step with our chassis setting at the Imola test following the race weekend which allowed me to feel more confident on the bike. I’ve only ridden the Aprilia at three different circuits and so it’s taken until now to fully understand the machine. I enjoy the flowing nature of the Assen circuit which really suits my style. My aim for the weekend is to join the lead group and show my true potential onboard the RSV4”.

“Assen is one of my favourite circuits. It is one of the old tracks and has a lot of history. The circuit is very fast and flowing. It is more of an old-school circuit and always produces an exciting race. A lot of fans always come over from England, so for me the atmosphere is always great. Last year we made a mistake in race one and crashed. In race two we had a top-five finish. So the bike can definitely be good at Assen and I am actually looking forward to going there with our new RR and the new set-up. The bike was very stable in the first races in Australia and Imola, and we can see where we can make improvements and what we need to work on. I am really looking forward to every race from now. We are getting closer and closer to that first victory. If we get the chance to win, I am certain we would take it. In Imola we were less than three seconds from winning. Although we had some small issues there, we made it on to the podium and were very close to the front guys. This is all very positive and hopefully we can continue this at Assen.”

“I have very good memories of Assen. I celebrated my first victory in the 125 cc World Championship there when I was 15, so it is a really special racetrack for me. Unfortunately the track now is much shorter. It is not the same as it was before. The old Assen was awesome. The last part of the new circuit is very nice, but the first part is quite narrow and very slow. At the test at Imola we found some good solutions. I am now more confident and hopefully we can see the result of the work we have put in as soon as Assen. I hope to have two good races and to fight for the podium. In any case, me and the team we will give our all.”

It would certainly be nice to get back on the podium this weekend as it’s been a while since I was up there. It’s been a typically slow start to the season, really, and it was a little disappointing that we weren’t more competitive at Imola. With the new one-bike rule, it’s become difficult to try new and different parts on the bike but the test day that we had after the Imola race was really valuable. I’ve got a better feeling with the front of the bike and, even though the weather wasn’t great and I’ve ridden faster around Assen, the test last week confirmed that improved feeling. We’re still looking for the optimum set-up with the new factory forks from Ohlins, but it’ll be good to race at Assen again. The place has got some really happy memories for me and it’s great for the whole team, because a load of guys from back at base, plus the partners of the crew, can come up and see what we do when we’re away for the weekend.

The weather that we had for the test at Assen last week was not very good and we had a lot of things that we wanted to try after the Imola test. But the day we had there was a lot more positive because I had to change some things. I like Assen very much — I liked the old circuit layout, but the new one is fun, too — and I won there on the 250 when I was riding in GPs. I am really looking forward to the weekend at Assen and continuing the improved feeling that I have with the bike. I will try as hard as I can, like always, and see how things are on Friday morning.

“I’m definitely looking forward to Assen. It’s a track I’ve always enjoyed riding and I’ve gone good there in the past. Last year I think I got the fastest lap and was only about a 10th off the lap record. It’ll be interesting to see how we get on at Assen and how we shape up next to everyone. At the test we had in Imola after the last round, we made some progress for sure and made some steps towards where we need to be. Going third fastest was a real boost for everyone, but we know the real test is to see how we end up in the races come Sunday. We all know there’s a lot of work ahead, but the vibe amongst us is good and I’m sure the bigger steps will come. I just want to say thanks to all the Suzuki fans for sticking with us at the moment. The support has been fantastic, and trust us, we’re pushing!”

“After Imola, I went back to America and I’ve done five days of solid riding on my enduro bike. Whilst it’s no substitute for being on my race bike, it has given my hand a good workout and I’m happy to report that all is OK in that area. I’ve also been training hard and I’m feeling better and better, day by day. Imola is a very physical circuit and I wasn’t 100% race fit, so that was a bit frustrating, but Assen is a less-demanding track and I’m sure my progress will continue there. I’m really looking forward to getting on my Crescent FIXI GSX-R1000 again and seeing for myself the improvements made during the test at Imola.”