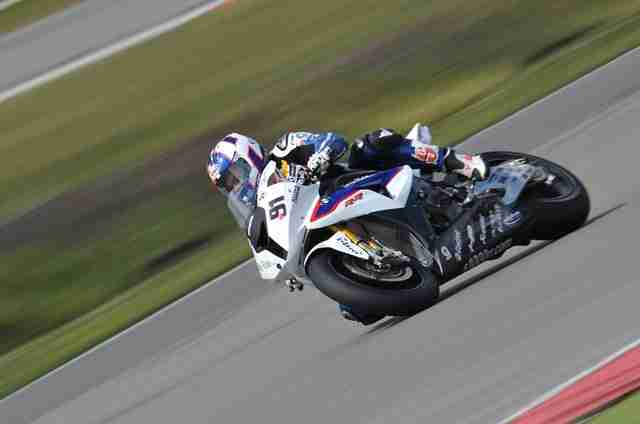 Due to the unpredictable Dutch weather, today’s Superpole qualifying at Assen (NED) turned out to be a kind of lottery with Team BMW Motorrad Motorsport having mixed fortunes. Factory rider Leon Haslam (GBR) will start the third round of the 2012 FIM Superbike World Championship from seventh, on the second row, with his team mate Marco Melandri (ITA), who qualified ninth, on the third row on his BMW S 1000 RR.

Today’s deciding qualifying was held under the new “Wet Superpole” format that was introduced for this season. When a Superpole is declared wet by the race director, it is reduced to two individual sections, each of which lasts 20 minutes. The fastest eight riders from the first section progress to the second and final section. In today’s Superpole 1, conditions were changing throughout with slight rain in the beginning, a heavy shower halfway through and a dry track in the final minutes. In these tricky conditions, Leon was fourth quickest and qualified for Superpole 2, while Marco was ninth and only just missed out on the second section. BMW Motorrad Italia Goldbet SBK Team’s rider Michel Fabrizio (ITA) qualified sixth fastest today, while his team-mate Ayrton Badovini (ITA) will start from 16th on the grid.

“I felt quite happy with this morning. We were consistently one of the fastest guys out there. In dry conditions this weekend we have issues with the rear of the bike giving me some chatter. This is something we are working on hard, but as the conditions have been changing a lot it has been difficult to have a full session to properly resolve it. Given that, I am actually quite happy to be starting from the second row, but I am disappointed as well because I know that without the difficulty we could have challenged for the front row.”

“For sure I am disappointed with the qualifying result. In the dry we have good pace here but the first Superpole was very difficult. It was raining around the track, but not everywhere at the same time. I saw many riders crashing so even if it had been dry in the last few minutes, I was not confident enough to push. I think I made a mistake but it was definitely better than crashing. Now we will see what is possible tomorrow. It is not easy to pass on this track, but I feel okay for the race.”

“After what we had seen, both in the dry and wet sessions, we were obviously looking for some better results from Superpole. On the other hand, the conditions were really extreme, especially in Superpole 1 and overall the results are not too bad, as we qualified for the second and third rows. Although Marco will start from the third row, he is confident that he can have a good race and keep a good pace in both conditions. Leon is still looking for the best settings for this race track and it certainly did not help him that the weather conditions changed so often but we are confident that tomorrow both riders will be fighting for the top positions.”