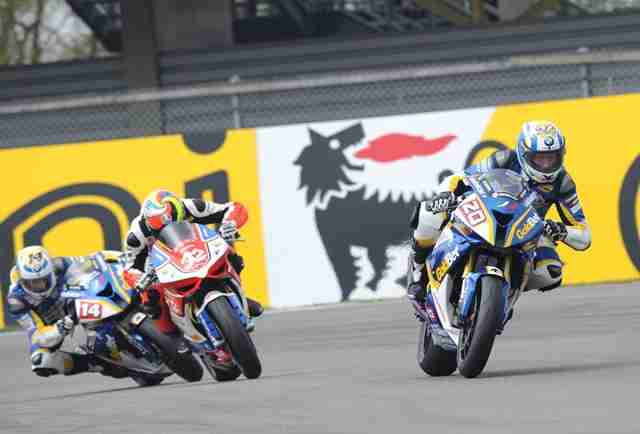 The BMW Motorrad Italia GoldBet Superbike Team has completed race day at Assen. The track hosted the third event of the 2012 World Superbike season and the second round of the FIM Superstock 1000 Cup this weekend. Both of today’s races saw mixed and unpredictable weather conditions. Race one started at noon but was stopped during the fourteenth lap due to the arrival of heavy rain. Twenty minutes later the race restarted with the grid determined by the finishing positions from the lap prior to the red flag, in accordance with the rules.

From the restart, Michel Fabrizio got a good start from 12th on the grid, entering turn one in sixth place and finishing the race in the same position. Ayrton Badovini moved off from seventh and was immediately in the leading pack. On lap seven he moved up to first place before eventually crashing heavily at “Hoge Heide”, turn 15. The rider escaped with no injuries other than some back pain.

Contrary to the first, race two was declared wet, but as the track was mostly dry, with just some damp patches, both Michel and Ayrton decided to race on slick tyres. Fabrizio, who moved off from sixth place on the grid, had a problem with his right boot which came unzipped twice, an issue that cost him a lot of time, and despite which the Rome based rider finished tenth. Badovini, who started the race from the fourth row, had a good race pace from the sixth lap onwards which allowed him to recover many positions and to finish the seventh.

In the FIM Superstock 1000 Cup race Sylvain Barrier scored another victory whileLorenzo Baroni took fifth place. The French rider was in first position across the finish line at the end of the eighth and last lap completed, as the race was stopped prematurely. A rider suffered a mechanical problem which resulted in a considerable amount of oil on the finish straight, and which gave the Race Director no option other than to red flag the race. Thanks to this victory, Barrier maintains the lead in the standings with 50 points out of 50, while Baroni is currently in seventh place with 12 points.

“I’d like to compliment the team for the amazing job done here at Assen. The unpredictable weather conditions required a high level of focus but the steps forward from Imola are evident. Serafino managed the whole weekend in the best way possible. Dino and the crew were impressive and made it possible to show the competitiveness of the bike in both the wet and dry. The championship is still at the early stages. We’ll surely have the chance to get the expected results we deserve.”

“It’s been two tough races, especially the first one as the weather was changing all the time. We’re sorry about Ayrton’s crash which happened while he was leading race one. For several laps we were looking at a possible top level result here at Assen. Luckily he wasn’t injured from that and he managed to start race two despite some backache. He did well to finish 7th in the second race. Michel was very unlucky as in race two his boot became unzipped twice and he almost had to stop to zip it up. We’re happy anyway despite the results not reflecting our performance, as we have found our way once again. I’m looking forward to Monza”.

“I’m disappointed about race two. Unfortunately my boot got unzipped on two different occasions and that cost me a lot of time. It’s a shame because my race pace was good and without that issue I’d have ended up higher than tenth. Looking at all that happened in race one, sixth place was not that bad.”

“After the difficulties we went through in the first two rounds I can say I’m quite happy with the performance this weekend but at the same time I’m disappointed about not getting the results I was looking for. It’s a pity about race one. My position before the crash was not bad at all! In race two I struggled a bit in the first part due to the damp patches and the backache, but after five or six laps I relaxed and got into a rhythm that matched the top five riders. We’re back in the right direction.”

“I got a bad start, as I did at Imola, but at turn one I managed to get up to third position and I was watching the two riders ahead of me. After Staring’s crash I was second with a gap between myself and the race leader. I quickly closed the gap and once at the front I pushed to the limit to get the biggest margin possible. I’m happy that I put in another good performance here at Assen. I want to thank my team for the wonderful job done”.