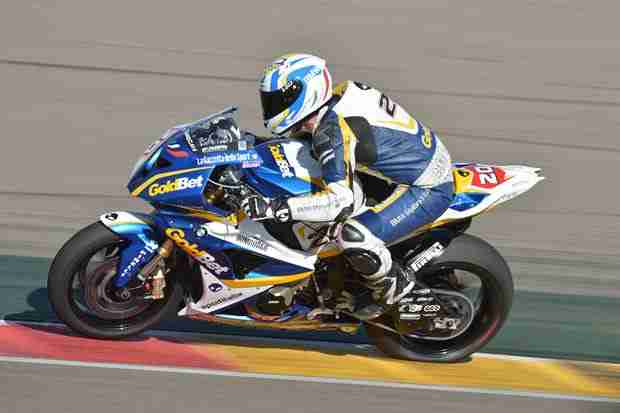 This afternoon, under the hot sun of AlcaÃ±iz’s MotorLand AragÃ³n, the Superpole defined the starting grid for the two Superbike races scheduled for tomorrow. The BMW Motorrad Italia GoldBet Superbike Team saw its riders Ayrton Badovini and Michel Fabrizioobtain a tenth and a thirteenth place on the grid, after the pair finished ninth and tenth respectively in the morning qualifying session number 2. Sylvain Barrier took pole position – the third of the season – in Superstock 1000 Qualifying 2. The French rider will be joined on the front row of the grid by Lorenzo Baroni, who got the third fastest time.

Michel Fabrizio started the Superpole session with a race tyre, eventually going back on track in the final minutes with one of the two qualifying tyres available with the goal of making Superpole 2. Michel was slowed down by another rider who was riding at reduced speed on track which didn’t allow him to cross the line before the chequered flag came out. Because of that Michel was thirteenth at the end and the first rider not to qualify for the next session by just six thousands of a second.

Ayrton Badovini, who progressed to Superpole 2 thanks to the tenth fastest lap-time set in the previous one, couldn’t get the best out of the qualifying tyre and finished the session in tenth place again, with a time of 1’59.248. “Speedy”, who will start from the third row tomorrow, remains confident because of the good pace shown in qualifying and the successful practice starts made at the end of Qualifying and Superpole 2. Sylvain Barrier and Lorenzo Baroni will both start on the front row in tomorrow’s FIM Superstock 1000 race with pole position and a third, despite both high-siding out of turn 7 during Qualifying 2.

“We certainly expected something more from the Superpole, as we showed in this morning’s qualifying. I think we had what it takes to enter Superpole 3. Unfortunately it did not happen and we’re not happy about it, but at the same time I’m quite confident for the races because both have a good pace that can turn into a good performance. We will wait and see what the weather conditions will be because a decrease in temperature is expected for tomorrow.”

“We’re happy about the pole and the third position obtained by Sylvain and Lorenzo, although both crashed in the afternoon session, fortunately with no injury. I’m positive though, because I think they can also have a good race.”

“It’s been an unlucky Superpole. After trying to set a good lap time with a B compound race tyre, in the final stages I went out with a qualifier but I was slowed down on the warm-up lap by a rider who already ended his session and so I couldn’t cross the line before the chequered flag was waved. It’s a shame, but tomorrow will be race time and my pace is not so bad.”

“Today was quite positive, especially because we found a good race pace but it’s a shame about the Superpole. I couldn’t get the best out of the qualifying tyre and so I couldn’t make it through Superpole 2. We did a good job though and I practiced some starts with positive feedback, so I think tomorrow we can have two good races.”