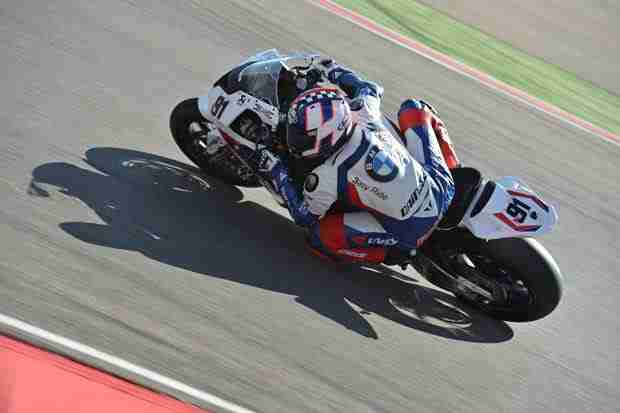 Starting from the first and second row, Team BMW Motorrad Motorsport is well positioned for tomorrow’s races at Motorland AragÃ³n. The Spanish track hosts the eighth round of the 2012 FIM Superbike World Championship. Factory rider Leon Haslam (GBR) finished today’s Superpole qualifying in fourth position, in front of his team-mate Marco Melandri (ITA), who occupies fifth on the grid with his BMW S 1000 RR.

Earlier the second qualifying practice this morning had gone well for Team BMW Motorrad Motorsport. Marco, who had secured provisional pole position yesterday, was fastest, setting a new best lap and Leon was fourth. In Superpole one, both riders just did one flying lap on race tyres and qualified easily for Superpole 2. In this second part, both did only one outing on qualifying tyres, with Marco improving his own new best lap from the morning. In the deciding Superpole 3 Leon set the fourth quickest time, while Marco was fifth. This time it was Tom Sykes (GBR) who set another new best lap. Ayrton Badovini (ITA) of the BMW Motorrad Italia GoldBet SBK Team will start from tenth place on his RR, and his team-mate Michel Fabrizio (ITA) from 13th.

“I am pretty happy. In the test and all the practice sessions we have been playing a little bit of catch-up. The feel for the track and the bike has been good. We lacked a little bit on the lap time and on the race distance as well but today we made some really progress and now I am really happy to have put my RR in the front row. I’m also confident that the race tyre is looking better too. We are well prepared for the races as that’s what we have been working on. It’s been a bit frustrating at times because we’ve not been looking for a lap time. Normally, the important thing is to get to a lap time and then maintain it but it has been the other way round this weekend. We’ve been working on making the tyre last and now that we have, the lap time has got better too. It’s is a funny way round.”

“I am disappointed, because the first qualifying tyre was working very well, but with the second one it was completely different and we struggled a lot. We had a lot of chatter and it was impossible to ride. Fortunately we have a good rhythm for the race. Of course it would have been better to start from the front row, but anyway, fifth place is okay. We will see what we can do in the races.”

“It was a positive day. We improved the performance of both riders. The first two rows are a good starting position for this race. Both crews have been working hard and we are pleased to see the result of the changes made on the bikes from yesterday to today. Marco was quite fast and set a new best lap on the race tyre in the qualifying practice and on the qualifier in Superpole 2. Leon has got back the feeling he was missing yesterday. We are very happy that he will start from the front row which is very important for the tough races we expect tomorrow. It is a pity that Marco could not replicate what he has shown in all the qualifying practices and also in Superpole 2 due to a qualifying tyre which was not working as we expected, but even starting from the second row he can fight with the top guys tomorrow. Both riders have a very good pace. For sure, the races will not be easy because it will be hot, but both our riders are well prepared and we are convinced that we all will enjoy the races.”