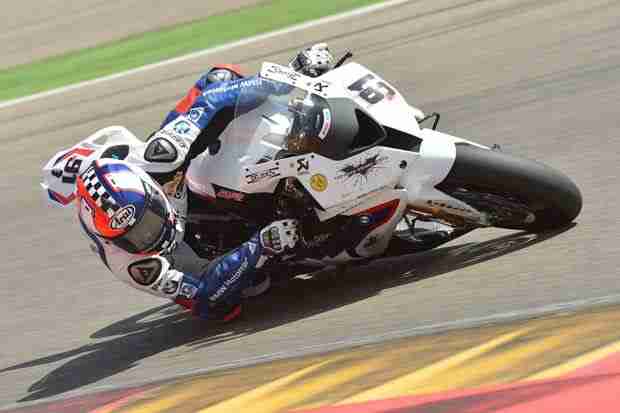 Team BMW Motorrad Motorsport secured provisional pole position for the eighth round of the 2012 FIM Superbike World Championship. Factory rider Marco Melandri (ITA) set the fastest time in today’s first qualifying practice at Motorland AragÃ²n (ESP). His team-mate Leon Haslam (GBR) qualified fifth which puts him on the provisional second row. BMW Motorrad Italia GoldBet SBK Team’s Ayrton Badovini and Michel Fabrizio (both ITA) finished the session in sixth and seventh, thus four BMW S 1000 RRs are on the first two rows. It was a hot start to the second half of the 2012 season with air temperatures near 40 degrees Celsius and track temperatures up to 60 degrees Celsius making the day a challenge for riders, crews and bikes.

“Every day is a new day but it is always important to start with a good pace. The bike is working very well here and we can focus on our target which is to get a good race rhythm so I am confident. Today it was very hot and we have never ridden in these conditions. We struggled with the consistency at the front of the bike. The lap times were really good, but after two laps the front tyre had already become unstable so I think that it will be difficult for everybody, because on this track with long braking in a leaning position the front is under a lot of stress. With these temperatures the race is going to be tough physically. Maybe it is going to be little bit cooler on Sunday, but it is okay. It is the same for everybody and I have trained very well on my fitness.”

“Today we were just doing our normal work. The pace is not too bad. We started off here as we finished at the test last week and the lap times were okay, even in the hotter conditions. We are getting closer but we just need to keep working. Today we were focusing on race set-up and the race tyre which I think is going to be the key for Sunday, especially in conditions like this. We had a few issues in the afternoon when we were struggling with the rear. Today was certainly very hot which changes the bike quite a lot. Obviously the tyres are a big factor in the heat. The tyre we would normally use doesn’t seem to be ideal for hotter conditions so we have to try to make the softer tyres work and last.”

“For sure we are happy with today’s result. It was a good start to the weekend but we must remember that it is only the first day. We could see that all the guys who tested here last week were in the top ten so we expect the others to come further up the grid tomorrow. Marco started this morning with a slightly different set-up to last week’s test. He and his crew have made some adjustments and Marco improved in the afternoon, but there is room for improvement at the front end. Leon’s lap time was not so far away from Marco’s, but he was not yet happy with how the bike feels. There are a few areas on the chassis and electronics set-up we have to work on but we are confident that tomorrow both of our riders can take a step forward.”