World Ducati Week 2012’s packed programme at Misano 21-24 June will include an all-star Drag Race shoot-out between Rossi, Hayden, Checa, Bayliss, Smrz, Guintoli and more on rubber-burning Ducati Diavel Carbons. Scheduled to start at 18.15 on Saturday evening, 23 June, the spectacular quarter mile Drag Race will challenge the razor-sharp reflexes of riders from both MotoGP and World Superbike along the start/finish straight of the Misano World Circuit. Last staged in 2010 aboard Ducati Streetfighters, this year’s elimination races will be run on specially prepared Ducati Diavel Carbons. 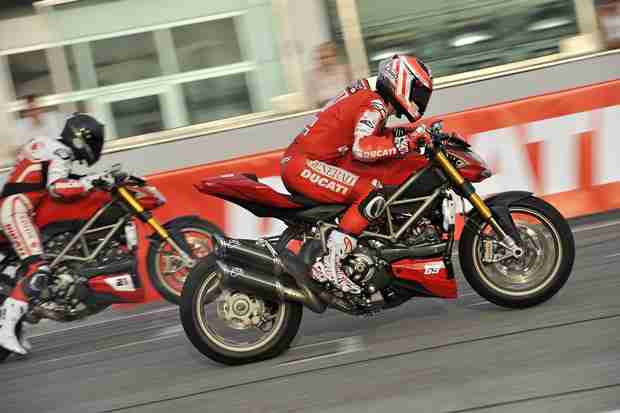 The high-octane show will feature Ducati’s innovative and high-powered Ducati Diavel Carbon, a 0-60mph in 2.6 seconds motorcycle that has thrilled owners around the world. First introduced for 2011 as “the new shape of power and style”, the awesome Ducati L-twin power will be tamed at WDW2012 by some of the world’s best riders and its asphalt-ripping performance is sure to be great entertainment for the thousands of spectators expected.

Tudor, the Swiss maker of quality watches and main sponsor member of the seventh edition of World Ducati Week, will be the official Timing Partner of the event with the honour of declaring the winner ready for the prize-giving after the race. The riders are then destined to meet the public at a giant WDW2012 party at the Piazzale Roma in Riccione later that evening where a spectacular night of music, entertainment and pure Ducati passion has been organised.