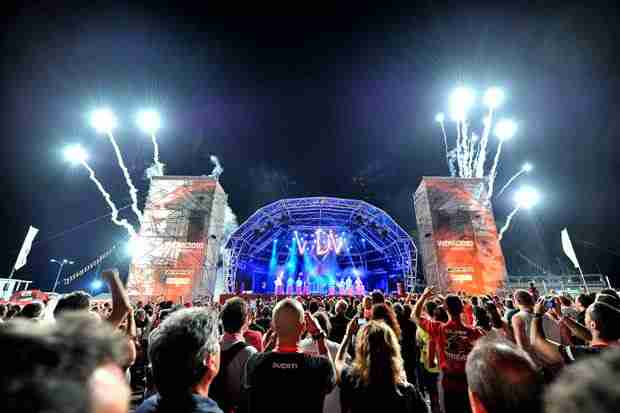 World Ducati Week 2012 “by night” is set to rock the Adriatic Riviera, with events on Thursday and Friday nights acting as a warm-up for a Saturday night spectacular when the heroes of Ducati MotoGP and World Superbike take to the stage in Piazzale Roma in Riccione, followed by US-based super group, the Ducati All Stars in concert.

Running “by day” from 21-24 June at the Misano circuit, WDW2012 will continue “by night” with three evenings of red-hot Ducati entertainment ready for the thousands of Ducatisti arriving from all over the world. In what is shaping-up to be a record attendance for this year’s event entitled, “The Planet of the Champions”, Ducati have organised an action-packed program of enhanced nightlife. The fun starts Thursday night when a massive procession of motorcycles leaves the Misano circuit to ride to nearby Cattolica, where the Beach Barbecue and Rock Party will be ready. The famous Rustida Barbecue will be followed by live music from the Ducati Band, a rock band whose members are all Ducati employees from the factory in Bologna. The spectacular sea-front opening night will finish with a stunning lightshow and fireworks display, typical of the Riviera.

On Friday night, the action moves to the centre of Misano where the Adriatic sea will provide the backdrop to a giant oval dirt track set-up for the Misano Speed Show. In the presence of “surprise guest stars”, stuntmen and riders of the Barrel Show will do battle in a series of adrenalin-fuelled performances.

The grand finale for WDW2012, will undoubtedly be from 9pm Saturday night, when a giant stage in Piazzale Roma on Riccione’s exclusive sea-front provides the venue for Champions on Stage and the Ducati All Stars live in concert. The show will host the Ducati racers as they arrive directly from their Diavel Drag Races at the circuit earlier in the evening and include Ducati’s MotoGP riders, Valentino Rossi and Nicky Hayden, the legendary triple World Superbike Champion, Troy Bayliss and reigning World Superbike Champion and Team Althea rider, Carlos Checa and teammate, Davide Giugliano. Team Effenbert Liberty Racing riders, Sylvain Guintoli, Jakub Smrz, Maxime Berger and Brett McCormick will also appear alongside Italian World Superbike riders, NiccolÃ² Canepa and Lorenzo Zanetti. In a unique tribute to Ducati’s racing history, this incredible line-up of current world-level Ducati riders will also be joined by the man who kick-started Ducati’s L-Twin racing success 40 years ago, the legendary 1972 Imola 200 winner, Paul Smart.

Ducati’s full-gas preparation for the passion-filled seventh edition of World Ducati Week will headline the US-based super group, the Ducati All Stars. The stunning line-up includes Steve Jones, founder-member of the Sex Pistols and the proud owner of a Ducati GT1000 and Multistrada 1200, Duff McKagan, former bass player of Guns & Roses and currently in love with the Diavel, and Streetfighter S rider, Franky Perez, singer and percussionist and undoubtedly one of the strongest voices of rock in Los Angeles. On guitar is Steve Stevens, Grammy Award winner for co-writing the Top Gun anthem and who began his career with Billy Idol and worked with Michael Jackson and Robert Palmer. Also on guitar, ex-The Cult and current Billy Idol guitarist, Billy Morrison alongside Loaded drummer, Isaac Carpenter.