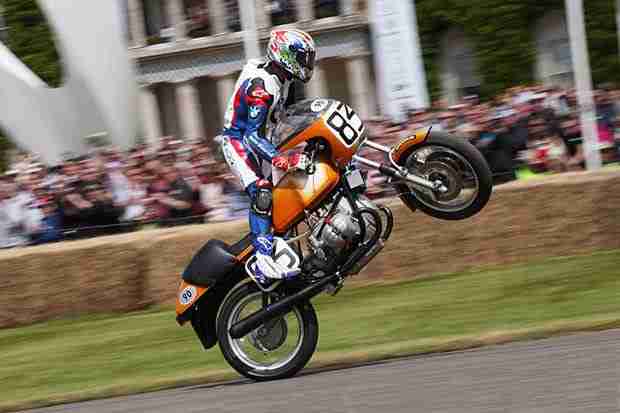 Last weekend, the “Goodwood Festival of Speed” again lured over 100.000 fans to Goodwood House near Chichester (GBR). The colours of BMW Motorrad were this time represented by brand ambassador Troy Corser (AUS). The two-time Superbike World Champion was taking the legendary 1976 BMW R 90 S on track at the famous motorsports event.

Troy was riding a motorcycle that made history: this BMW R 90 S took American Steve McLaughlin to victory in the first ever AMA Superbike race back in 1976 at Daytona (USA). Back then, McLaughlin won a tight photo-finish against his BMW team mate Reg Pridmore (USA) who later that season celebrated the historic first ever AMA Superbike title. Plans for a Superbike World Championship only took shape some years later. Now, BMW Motorrad Motorsport is contesting the series, that debuted in 1988, with factory riders Marco Melandri (ITA) and Leon Haslam (GBR). McLaughlin’s victorious BMW R 90 S has found a new home at the BMW Museum at Munich (GER). At the “Goodwood Festival of Speed” it returned to the race track — ridden by the two-time world champion.

“It was a fantastic event; there were many, many people”, Troy enthuses. “The atmosphere was really nice, the weather was good, it was not too hot and the BMW R 90 S is a great bike to ride. I thought it would be a lot heavier but is actually pretty light and has quite a lot of torque. It is fun to ride and I even did some wheelies with it. Overall it was a great weekend. I also met some of the ‘older guys’, like John Surtees and Wayne Gardner who I have not seen for a while so it was good fun.”

Since 1993, the “Festival of Speed” has been held every year on the estate of motorsport enthusiast Lord March in the British county of West Sussex. It is here, where current stars and historic legends from automobile and motorcycle racing meet. Highlights are always the hillclimb runs, during which the riders and drivers race up the world-famous 1.16-mile road through the Goodwood House estate in and on modern and historic race vehicles.