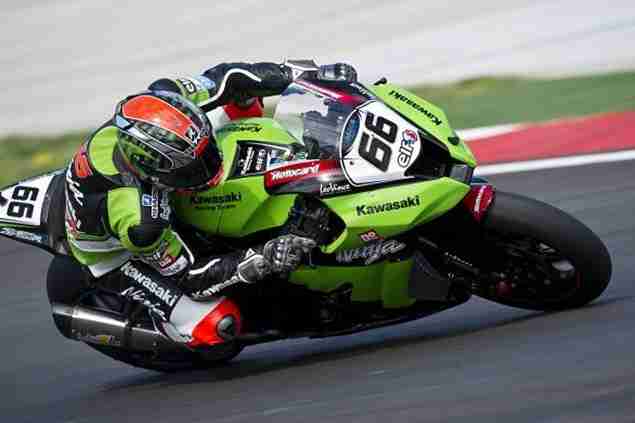 Majority of the teams except for Effenbert-Liberty, Pata and Pro Ride Honda have stayed for an official day of testing, ahead of the Assen round that takes place on April 22nd. The test however was marred by Joan Lascorz’ horrific high speed crash (200km/h) and the sobering news that the 27-year old Kawasaki rider is undergoing spinal surgery at the Ospedale Maggiore in Bologna, and unfortunately the prognosis is not good, as the latest reports from Italy suggest that the injuries are very severe and Lascorz is at risk of lower limb paralysis. The Italian police are currently investigating the incident (its standard procedure) and have confiscated the #17 Kawasaki and found that the frame has broken apart on impact.

The riders were unsure if to continue the afternoon session, but the Imola race directors said there were no safety issues involved and it was up to the riders to continue and with almost everyone except for Althea Racing, Chaz Davies and John Hopkins who decided to rest due to their injuries heading back to the track for more testing. Tom Sykes who took the podium with two second places on Sunday posted the fastest lap time and set a new Imola record of 1.46.609 improving on his Superpole time ( 1.47.748) and his own lap time during the race thanks to Pirelli’s new tires.

Jonathan Rea took second place with a best time of 1’47â€³121, followed by Leon Camier in third with a 1’47â€³238, and Leon Haslam in fourth. Max Biaggi was fifth ahead of the Imola double time winner Carlos Checa.