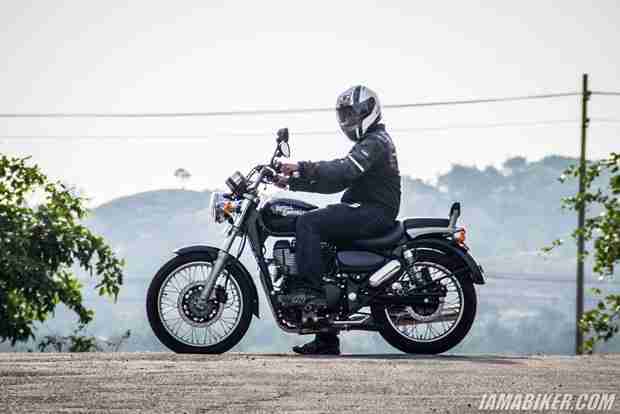 It has been a good 10 months since the RE Thunderbird 500 was first shown to the world at the AutoExpo 2012 at New Delhi. Since then there has been a heavy regular inflow of prospective customers to the Royal Enfield showrooms for more information. We were lucky enough to get our hands on a pre-production model couple of months back and were pleasantly surprised by how Royal Enfield has stepped up their game.

The new Thunderbird 500 is priced at Rs 1,82,572/- on-road Mumbai and its UCE engine will produce a strong 27.1PS of power and 41.3Nm of torque. Other new feature highlights include a massive 20 litre tank, projector headlights, a new meter console which is a combination of the old school needles and a digital system, a LED tail light, very comfortable seats, and an all-black engine with silver highlights. The TB500 we had tested out earlier could easily do a constant 120kmph cruise speed and had a pretty quick 0-100 time too. For a detailed look on what’s new and an on-board video, check out our main detailed article on the Thunderbird 500.

The launch would be carried down to other cities across India in the coming days and bookings should start simultaneously, which would give us more exact figures on on-road pricing of Thunderbird 500 in Delhi, Bangalore, Chennai and other major cities.