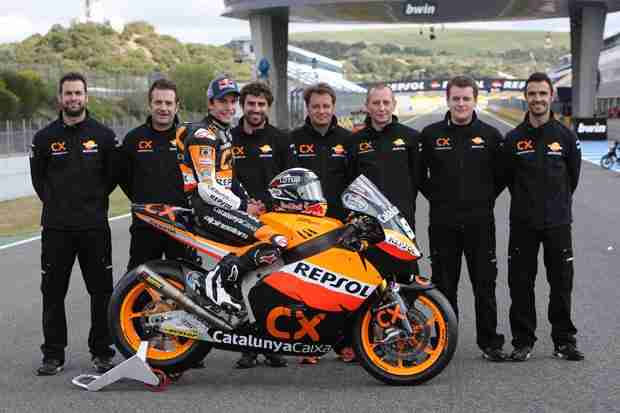 To win a World Championship, talent, hard work, sacrifice, a good bike and a little luck are all needed. Having people with similar capacities, the best professionals available, is also essential for providing the utmost confidence to the rider as they give 100% on every corner.

On Marc MÃ¡rquez’ journey to a second World Championship title –this time in Moto2– the Spaniard has added several team members to the winning formula started alongside manager (and 125cc World Champion in 1999) Emilio Alzamora. At the head of the group is Marc’s right hand man: Santi HernÃ¡ndez. He is the director of the team and the man in charge of adjusting the bike to the rider’s preference, converting feel to setting modifications. Alongside him is ‘third man’ Hugo Bucher. He is the most experienced member of the team, with 18 years in the World Championship, and is in charge of telemetry. He analyses the data gathered on each run, establishing possible changes to make as a result.

The Repsol rider also has some trusted mechanics: Carlos LiÃ±Ã¡n, Jordi CastellÃ  and Javier Ortiz. They are all from the Monlau mechanichs school and carry out the changes suggested by Marc, Santi and Hugo, as well as putting together and taking apart the bike after each session. Carlos has worked with riders like Emilio Alzamora and Sete Gibernau, whilst Jordi has spent the most time at MÃ¡rquez’ side. He was a mechanic for the then-13-years-old rider in the Spanish Championship. Javier Ortiz coordinates with Carlos and Jordi in working on the bike, and also shows the pit board to Marc when he is out on track. He is in charge of tyre and fuel logistics. HÃ©ctor MartÃ­n rounds off the team. The coordinador of the team and the man who handles the daily agenda of the rider, he also takes care of every excursion for the team.