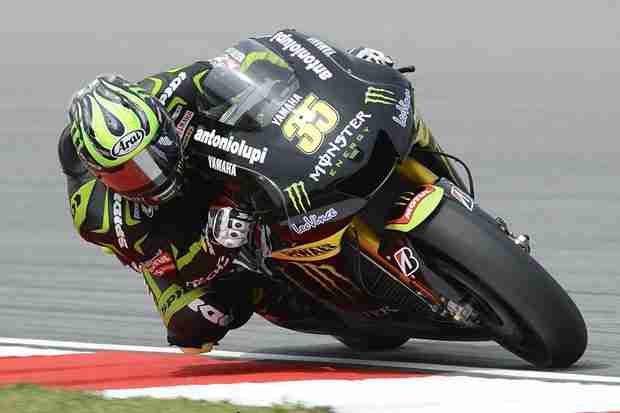 A heavy early afternoon rain shower prevented Monster Yamaha Tech 3 Team riders Andrea Dovizioso and Cal Crutchlow from building on a positive opening practice session at the long and technical Sepang International Circuit today. Dovizioso was fourth and Crutchlow fifth fastest in typically hot and humid conditions this morning, but torrential rain that fell shortly before the start of this afternoon’s second practice session meant only 12 riders took to the track in mixed conditions.

With little to learn from lapping on a drying surface, Dovizioso and Crutchlow decided not to complete a lap this afternoon, but after a positive start this morning, both are optimistic they can challenge for pole position in tomorrow’s qualifying session. Dovizioso’s best lap of 2.02.236 in FP1 meant he was the leading non-factory rider in the classification and he was just over 0.3s away from the top three, which included in-form Spanish duo Dani Pedrosa and Jorge Lorenzo.

Crutchlow was only 0.030s behind his Italian teammate after he quickly found a set-up that coped with slippery track conditions this morning. The British rider ended with a best time of 2.02.266.

“The track was very slippery this morning but I was pleased to finish fourth and my lap time was fast and competitive. I could go faster at the end of the session even with a lot of laps on the rear tyre, so it is a promising start to the weekend. I wanted to try some important changes to the set-up of the bike this afternoon but the rain that fell before the start meant we couldn’t do the work we had planned. The conditions were mixed, so it wasn’t worth going out and taking any risks and we will have to wait to try the modifications tomorrow.”

“It was a shame the rain meant I didn’t get to go out on track for the second session because I had some work to do to improve the bike. I felt confident right from the start this mornin g and even though I wasn’t pushing that hard because the track was quite greasy, the lap time still came quite easy. Hopefully tomorrow we will have better luck with the weather and we can focus on improving the bike for the race.”