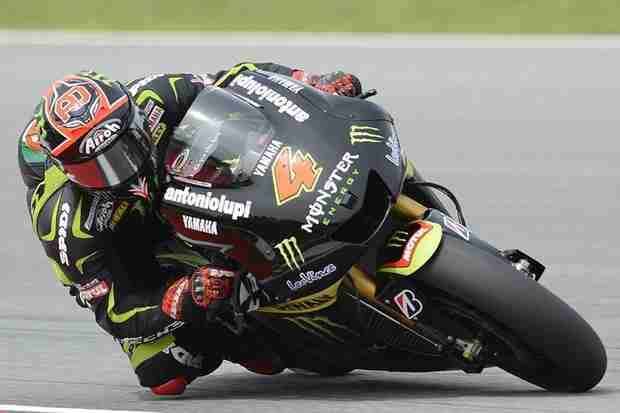 Andrea Dovizioso extended the Monster Yamaha Tech 3 Team’s outstanding qualifying record in 2012 by securing the French squad’s 10th front row start of the season at the Sepang International Circuit in Malaysia this afternoon. For the sixth race in succession, the Monster Yamaha Tech 3 Team will be represented on the front row after Dovizioso battled for pole position throughout a closely fought qualifying session in searing heat and humidity at Sepang.

Dovizioso’s silky smooth riding style helped him adjust brilliantly to slippery track conditions after earlier rain and his fastest lap of 2.00.567 put him on the top of the timesheets in the final stages of the session. But in-form Spanish duo Jorge Lorenzo and Dani Pedrosa were able to improve their pace in a dramatic finish. Dovizioso’s best pace was only 0.039s behind Pedrosa in second and having made significant progress in improving rear grip with his YZR-M1 machine, the Italian rider will start tomorrow’s 20-lap race confident he will be in the hunt for a seventh podium finish.

Cal Crutchlow was reasonably satisfied with his afternoon’s work, despite seeing his sensational run of four successive front row starts come to an end this afternoon. The British rider will start from the middle of the second row in fifth position after a stunning last lap of 2.01.178 put him inside the top six on the grid for the 14th time in 16 races. After battling for the podium right down to the last lap in the previous two races, Crutchlow is optimistic he will be in contention for the top three again to boost his hopes of securing fifth position on the overall World Championship standings.

“I am very happy with today’s front row because it is confirmation of how strong we have been all weekend. I have to say a big thanks to my Monster Yamaha Tech 3 crew because in every session we have made progress with the set-up of the bike and for qualifying we made another big improvement. It is always good to be on the front row bu t the pleasing aspect is my race pace. I am very close to Lorenzo and Dani and my goal will be to stay with them for as long as possible tomorrow. With more rain earlier it meant the track was quite slippery, but normally when that is the case I am very fast and again today I have proved that. Hopefully it will be a dry race tomorrow but if it is raining then it will be the same for everybody and nobody has an advantage because we haven’t tested on a full wet track.”

“After qualifying on the front row at the last four races I should be pretty disappointed with fifth position and I am. To be honest I am not happy with the performance of the bike and I had the same issue that struck in qualifying last weekend in Japan. I had a big vibration and all the changes we made to improve the situation didn ‘t work. It felt like I had zero grip and we can see the problems on the data but we still haven’t been able to identify what is causing the vibration. We have a lot of work to do tonight and I will be sitting down with my crew and analysing a lot of data to come up with a plan for the race. If the situation remains the same for the race it will be really difficult and demanding. As always I will try my best and the main goal will be to claw back some of the points I lost to Alvaro and Valentino with the bad luck in Japan.”