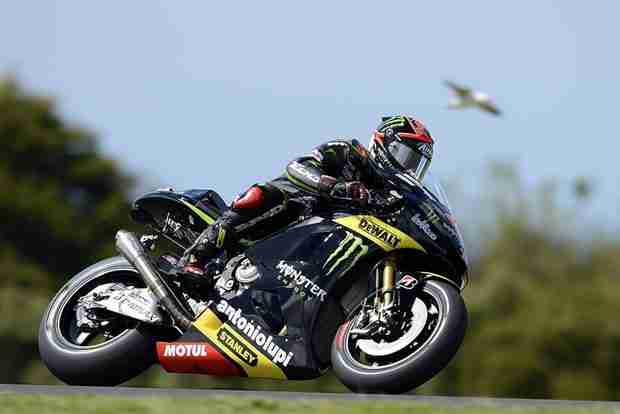 Cal Crutchlow and Andrea Dovizioso will start tomorrow’s AirAsia Australian Grand Prix from the second row of the grid, with the Monster Yamaha Tech 3 riders confident they can both battle for the podium in the penultimate round of the 2012 World Championship.

Still not back to 100% fitness after being struck down by a severe fever and bout of bronchitis heading into this weekend’s race at the fast and flowing Phillip Island track, Crutchlow came close to securing a brilliant eighth front row start of the season. In cool, cloudy and windy conditions, the British rider spent the majority of the session concentrating on improving the race set-up of his YZR-M1 machine.

Crutchlow was satisfied with his fast and consistent pace on a used soft Bridgestone rear tyre, which bodes well for a strong challenge in the latter stages of tomorrow’s 27-lap race. Crutchlow managed to set a best time of 1.30.763 that left him just 0.188s behind in-form Dani Pedrosa in third position. Andrea Dovizioso also tested the endurance of Bridgestone’s soft rear tyre option over a long run and he was happy with his speed and consistency.

A lap of 1.31.200 put the Italian inside the top three in the early part of the session. But when he switched to a new soft rear tyre to push for a second successive front row start, he couldn’t find the same confident feeling and he secured the final place on the second row in sixth.

‘We made some good improvements to the bike today and fortunately I am feeling better too. I’m still not 100% but I have been resting as much as possible and I am improving each day. It was good to have the bike feeling better today as well, although I wasn’t pushing too hard for the whole session. I used an old soft rear tyre that I’d run in this morning’s practice just to check my pace at the start of the session. I’m really happy because my times were fast and consistent even when the rear tyre had over 30 laps on it. That bodes well for the race tomorrow and I’m confident if I can run the same pace I’ll be in the podium hunt. On a new soft tyre I think I could have gone a bit faster but I got held up. Fourth is still a good result and I’m looking forward to a good battle in t omorrow’s race, though based on what we’ve seen so far, Casey is on another planet and nobody will get close to him.”

“The session started very well and I was quickly into a fast pace that put me inside the top three. My race pace is around the mid-31s and that should be competitive enough to be battling for a podium tomorrow. The problem came when I tried to improve my time on a new soft rear tyre. Immediately it was sliding around a lot and it didn’t have the grip I was expecting. I just didn’t have a good feeling and it was impossible to push like I wanted. We need to analyse what might have caused that, so considering I couldn’t go any faster on a new soft rear tyre at the end of the session, I’m pretty pleased to still be in the top six. We have improved the bike in every session and I am confident I will be battling for the podium.”