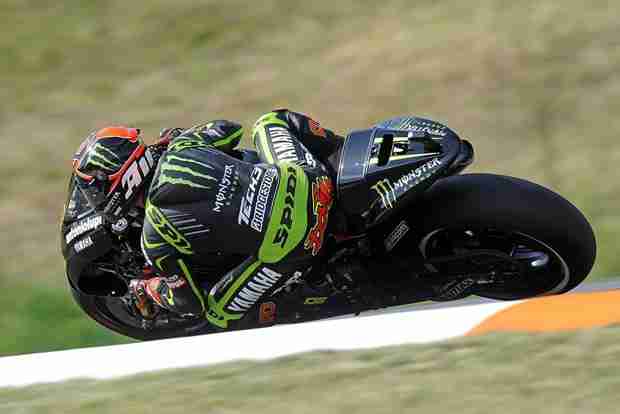 The Monster Yamaha Tech 3 Team enjoyed a positive start to the bwin Grand Prix Ceske Republiky today after Andrea Dovizioso and Cal Crutchlow both mounted a strong challenge for the top three in hot and sunny conditions at the Brno circuit. Dovizioso arrived back in Europe brimming with confidence after scoring his fifth podium in seven races at the legendary Indianapolis Motor Speedway last weekend. And his impressive form continued today after a lap of 1.57.189 put the Italian in third position in this morning’s opening practice session.

With temperatures soaring to a demanding 28 degrees, Dovizioso improved his pace to a 1.57.055 this afternoon to finish third quickest again and his time was just 0.144s behind World Championship leader Jorge Lorenzo in second position. British rider Crutchlow was also satisfied with his fast pace after he finished fourth fastest in both sessions. The 26-year-old made a confident start this morning with a lap of 1.57.418 and in the second session he was able to lower his pace to a 1.57.215.

Just 0.160s split Dovizioso and Crutchlow on the combined timesheets and both are optimistic that overnight tweaks to improve the set-up of their YZR-M1 machines they can fight for a front row start in tomorrow’s qualifying session ahead of Sunday’s 22-lap race.

“I am really satisfied with the work we have done today. Obviously we arrive here in great shape after the fantastic podium in Indianapolis and immediately I was comfortable with the bike and the big positive is in both sessions I was very close to the front. I was only 0.186s behind Dani this morning and 0.197s behind him this afternoon and it is great to start the weekend being so competitive. In every race I have been on the podium this season I have not started this strongly, so hopefully this is a good indication that we will be very strong in the race on Sunday. The good thing about today is we can start to work immediately on improving the set-up of the bike because unlike in Indianapolis, the Brno track isn’t dirty and there was a lot of grip. I’d like it to be a little easier to make the lap time beca use it feels I am quite close to the limit on the front. But we have a plan for tomorrow that should help us in that area.”

“Today wasn’t a bad start to the weekend because I was fourth in both sessions and very close to Andrea. But we can definitely make some improvements to the bike. This afternoon I struggled quite a lot with the hard tyre and we need to have a look at the data closely to get more of an understanding why. I’ve got good pace on the soft tyre and I’m convinced I can be a bit quicker because I didn’t put in a soft tyre until right at the end of this afternoon’s session. I feel confident for tomorrow and am sure we can challenge for a decent grid position for Sunday.”