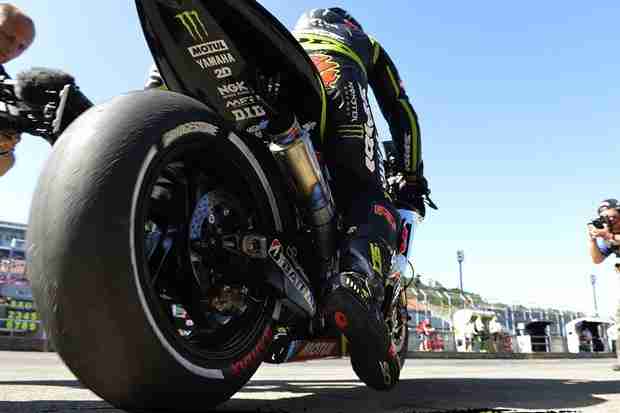 Andrea Dovizioso made a flying start to Yamaha’s all-important home race in Japan today, the Monster Yamaha Tech 3 Team rider finishing third fastest in both practice sessions at the Twin Ring Motegi. With the stop and go nature of the 2.983 miles circuit perfectly suited to Dovizioso’s hard braking style, he wasted no time in showing his potential in gloriously sunny conditions this morning.

A best lap of 1.46.919 put him third behind Jorge Lorenzo and Dani Pedrosa and he continued that impre ssive form into the second session. Once again he was able to finish the fastest non-factory rider in third position to boost his hopes of recording a seventh podium of the campaign on Sunday.

Dovizioso improved his pace by almost 0.7s in FP2 and his best time of 1.46.282 was only 0.092s behind World Championship leader Lorenzo in second place and 0.194s away from Pedrosa’s quickest pace. The opening day turned out to be the difficult challenge Cal Crutchlow had predicted, with the hard braking nature of the Twin Ring Motegi not best suited to his braking and cornering style. Crutchlow dedicated the majority of his time on track today to improve his feeling in the hard braking zones, but he was never able to find a comfortabe set-up with his YZR-M1 machine and he finished ninth on the combined leader board. Crutchlow remains confident he can make big progress tomorrow and his best time of 1.46.984 was less than 0.1s away from a top six position.

“It has been a really good start to the weekend because I did my time with the hard tyre and that looks like being a probable choice for the race. The good thing is I am very competitive already but I know we can improve on the last part of the entry to the corner. I don’t feel comfortable in that area, but even if I don’t feel 100% confident with the bike and ready to push as hard as I know I can, I am very close to the fastest two. I believe I will be able to follow Dani and Jorge on Sunday and that is basically my aim for the weekend. It will be difficult to fight with them for the victory but I am certainly looking to be battling for the podium again on a track that I really like.”

“Today wasn’t the start I was hoping for at all because we worked very hard to improve the bike but I was unable to find a comfortable setting. I am way down on the timesheets and a long way behind Andrea and we are both on the same bike and the same tyres, so it is clear that we have a lot of work to do to improve tomorrow. Nothing we tried seemed to work and give me the feeling I wanted and I certainly need to improve and be faster with the hard tyre because that might be the tyre I need to race with. There isn’t one particular place where I am struggling. We have quite a few issues but I will sit down with my Monster Yamaha Tech 3 crew tonight and see if we can come up with a solution to help me be more competitive tomorrow.”