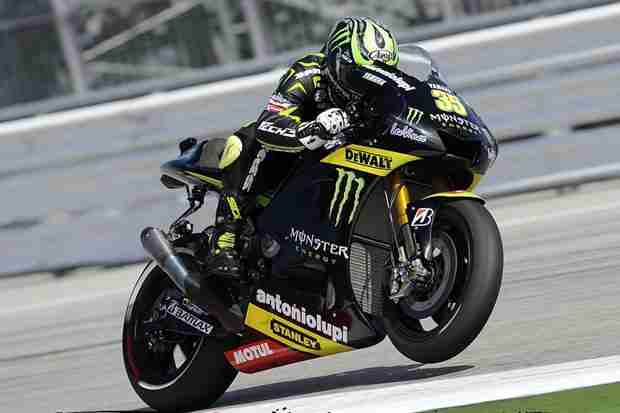 Cal Crutchlow will start tomorrow’s GP Aperol di San Marino e Riviera di Rimini confident he can challenge for another rostrum finish after qualifying his Monster Yamaha Tech 3 Team machine on the front row of the grid for the fifth time in 2012. The British rider’s best lap of 1.34.001 around the Misano World Circuit Marco Simoncelli looked on course to secure him a maiden MotoGP pole position when he headed the timesheets with less than two minutes remaining.

Spanish duo Dani Ped rosa and Jorge Lorenzo though were able to improve their pace right at the end of an exciting session, but Crutchlow was still able to secure a seventh front row start for the Monster Yamaha Tech 3 Team this season. Crutchlow’s performance was particularly impressive considering he had only completed 10 laps prior to this afternoon’s qualifying session. The session took place in conditions normally witnessed at the Misano MotoGP, with bright sunshine a welcome respite from the grey and gloomy skies that had dominated and disrupted yesterday’s and this morning’s practice.

Crutchlow’s pace was only 0.144s behind Pedrosa’s pole time and the 26-year-old will start the race brimming with confidence that he can follow up a stunning career first podium in Brno last month with another top three in the 28-lap encounter. The tricky track conditions in practice prevented Andrea Dovizioso from completing any meaningful preparations until this afternoon and the Italian was able to qualify his YZR-M1 in an encouraging seventh position.

The Italian worked tirelessly with his Monster Yamaha Tech 3 crew to make up for the lost track time and he ended with a best lap of 1.34.916. That left him less than 0.3s off the top six and Dovizioso remains positive that he will be a serious contender for a podium in front of his home crowd tomorrow.

“I am really happy to be on the front row again and I am particularly pleased for my Monster Yamaha Tech 3 crew because they did a fantastic job in giving me a great bike, despite the lack of time on track. To be honest I felt a bit rusty because after missing the whole of yesterday’s practice with the weather, Brno felt like a long time ago. The start of the session was quite difficult and I was struggling for rear grip. I spoke to Jorge and he said he was also having an issue getting temperature into the tyre but every minute the track was getting better and the grip was improving. I’m happy to be on the front row and I am fast in all parts of the track. If my four best sector times were put together I’d have been in pole position. It is going to be a hard race because nobody has had the chance to properly work on their dry set-up, but I am really looking forward to it. I am feeling really confident after scoring my first podium in Brno and the good thing is we have carried that momentum to here. Hopefully we can put on a good show for all the fans that turned up yesterday and this morning when not a lot was happe ning on track.”

“I can’t be satisfied with the work we did when I am only seventh on the grid. We should have done a better job but I am still on the third row and I am convinced I can fight for the podium tomorrow. It is going to be a very difficult race because we are going into the unknown a little bit with so much track time lost because of the weather. It will be a bit of a gamble on the set-up but we did manage to gather a lot of good data this afternoon and I know we will be competitive. Hopefully tomorrow the weather is good and I can avoid any problems at the first two turns, where it is very tight. I need to make a good start and I am looking forward to battling for another podium in front of my home crowd again.”