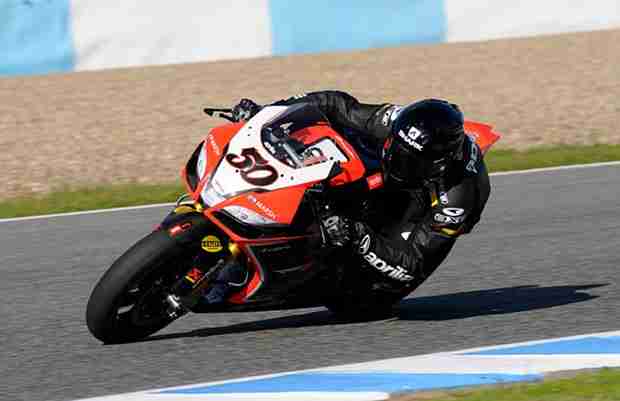 Sylvain Guintoli will be a rider for the Aprilia Racing Team in the 2013 World Superbike Championship. Guintoli, a 30 year old Frenchman, will ride alongside Northern Irishman Eugene Laverty astride an official Aprilia RSV4, the bike which, in the season which just ended, took the SBK World Manufacturer Title and accompanied Max Biaggi to victory in the Rider Championship.

Guintoli, a rider with plenty of experience who races with number 50 on his fairing, was born in MontÃ©limar in June 1982. He raced on an Aprilia in the World Motorcycle racing 250 class from 2001 to 2006. He boasts two seasons in the MotoGP class (2007 and 2008). He made his WSBK dÃ©but in the last race of the 2009 season at the Portuguese Portimao circuit. In the last three years in World Superbike he has taken a total of ten podiums with three wins and a pole position, always finishing out the championship in the top ten rider standings.

Gigi Dall’Igna, technical and sport director of Aprilia Racing had this to say: “Sylvain is a great addition to our team and we were very keen to have him. His excellent first contact with the RSV4 during the tests held at Jerez were also encouraging. He proved to be a fast and solid rider straight away. He and Laverty will make a team to be reckoned with. We’re preparing for the new season now. We have the world champion bike and two capable riders who always aim for top results, so I think we’ll have fun”.

“I am very happy — said Sylvain Guintoli, busy with his first tests on the Aprilia at Jerez — especially because the feeling with the RSV4 has been good right from the first few metres. To be able to sit in the saddle of the world champion bike is a great opportunity for me – one of the most important in my career. I think the bike has extremely high potential, as we’ve seen in the past few years, and I’m confident that I’ll be able to put in some excellent results with it”.

Aprilia is the reigning WSBK champion and boasts a collection of 51 world titles: 4 in Superbike, won in 2010 and 2012 (two Rider-Manufacturer double wins), 9 world titles in off road disciplines and 38 championship titles in World Motorcycle GP where it is the most victorious Italian and European brand of those active in racing.